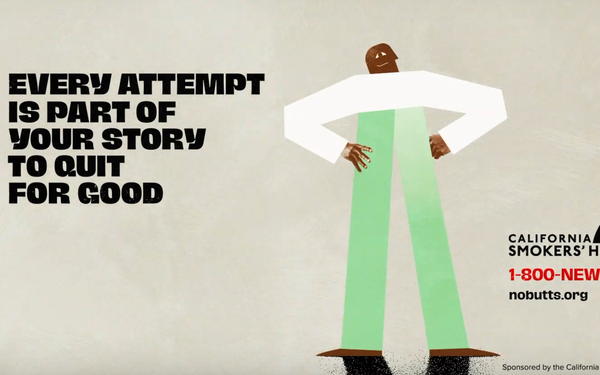 The California Department of Health is out with a new campaign from Duncan Channon and Nexus Studios that targets smokers who have attempted to quit and failed.

The creative uses animation to illustrate stories of those trying to quit their habit but not succeeding. “Steve,” for instance, recounts the rules he's invented and broken while attempting to stop smoking.

“Our approach is all about reframing failed quit attempts as necessary forward progress in a smoker's and vaper's journey to quit nicotine for good,” said Anne Elisco-Lemme, executive creative director, Duncan Channon. “Smokers and vapers often feel a sense of defeat when their quit attempt fails, but it's like building a muscle. Eventually, you get to where you want to be.”

The “Tell Your Story” media strategy is designed to reach two audiences: smokers, who tend to be older and dealing with high stress levels; and, vapers, who are mostly younger. Health officials report they have been receiving a surge in calls from younger vapers looking for support in quitting.

The campaign — part of a multiyear effort to prevent or reduce tobacco use, including e-cigarettes — includes three PSAs as well as radio ads, digital media and social creative that calls on audiences to “Quit for COVID.”

The organization will launch additional radio spots in late January that focus on real stories of smokers and vapers quitting because of the virus. All messaging drives viewers to NoButts.org or to call the CA Smokers Helpline (1-800-No-Butts).