So Nice To See! 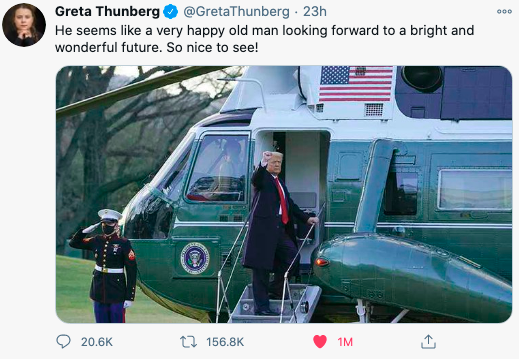 That unfamiliar sound you heard was the collective exhaling of America. Well, most of it, anyway. The far more delicate, almost imperceptible, noise was the melting of countless snowflakes embodied by Wednesday’s trending -- and ironic -- hashtag #notmypresident

Yes, America remains a divided nation, but at least we no longer have a Divisor-in-Chief. And if there was anything President Joe Biden’s inaugural address made clear, it’s that the American Con Age is over.

While some very fine memes abounded on both sides, at least all Americans could come together and unify around the hilarity of a seated, bemittened, cross-armed Bernie Sanders, who next to poet Amanda Gorman’s recitation of “The Hill We Climb,” was the breakout star of the inauguration.

There were far too many media commentaries and social media posts to encapsulate in one next-day armchair review, but my personal favorite was climate activist Greta Thunberg’s karmic retribution send-off of the departing President: “He seems like a very happy old man looking forward to a bright and wonderful future. So nice to see!”

It was payback for @realDonaldTrump’s similar remark about Greta’s impassioned 2017 speech to the United Nations. Of course, his tweet exists only in memory, as does his Twitter account, while @GretaThunberg at least has a future.

Among the best, most uplifting moments that took place Wednesday were Biden’s talking points about the resumption of “respect,” and “unity,” and his underscoring point, “Democracy Has Prevailed,” which also happens to be the six-column banner headline on today’s New York Times.

Coming two weeks after the previous President incited a seditious attack by deplorable insurgents on Congress in an attempt to overturn democracy, the inauguration’s media day was indeed an important signal that we have prevailed.

I don’t have much to say about the last President, except that I do think he managed to unify America around a common purpose, and to remind us that we need to be constantly vigilant to defend our democracy against some very real-world threats, including those from within. 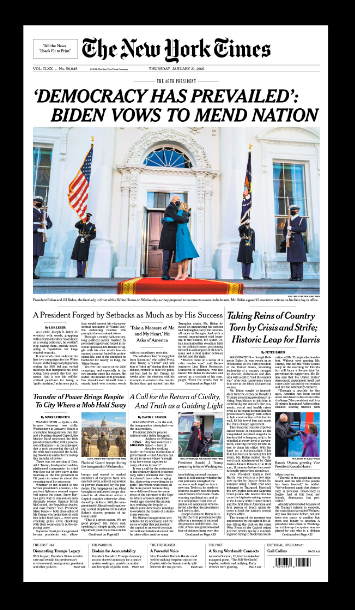 1 comment about "So Nice To See!".
Check to receive email when comments are posted.
Next story loading