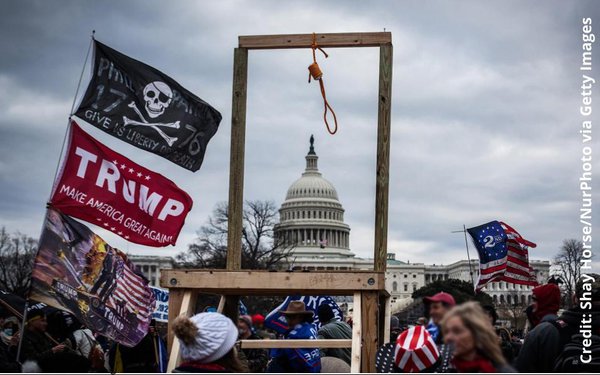 Have you ever woken from a nightmare so terrifying you had to replay it in your head just to process it in order to get back to sleep? That is what watching Frontline’s “Trump’s American Carnage” is like.

The special report, which airs on public TV stations tonight at 10 pm (ET), takes its name from the former President’s infamous “American Carnage” inauguration speech four years ago, which painted a bleak picture for America, but ironically proved a little too self-fulfilling. You know, “promises made, promises kept?”

Actually, the report does an admirable job of compressing four years of divisive hate-mongering, race-baiting statements and actions by the now-twice-impeached President, just as his second impeachment trial is set to begin. If it is the only evidence provided, the verdict should be obvious to anyone who cares about the Constitution, American democracy, and how any future presidents might behave.

The documentary follows a relatively linear path beginning with the then-candidate’s 2016 violent campaign rallies, through the Nazis' and White Supremacists’ deadly march in Charlottesville, and especially the President’s waffling response -- not just failing to condemn their acts, but tacitly endorsing them.

While Charlottesville may have been the tipping point -- or the lighting of the insurrectionists’ fuse -- the progression that followed -- egging on the Texas Minutemen to head to the Mexican border to stop the “caravan” to radicalizing violent opposition to the Black Lives Master protesters  to ordering federal troops to attack peaceful protesters in order for the former President to pose for his bible-holding photo opp to calling on militias to “liberate” various state Capitols -- all culminated in his “Stop The Steal” rally during which he explicitly incited his radicalized supporters to attack the Capitol.

Regardless of how the Senate ends up voting, the Frontline episode ends with journalist and political commentator Charlie Sykes' foreboding warning that this may not be the end of a nightmare, but “prologue” for an ongoing one in which one of the two major political parties promotes lies and conspiracy theories.

“And we are going to be living with that, I’m afraid, for a very, very long time,” he concludes.