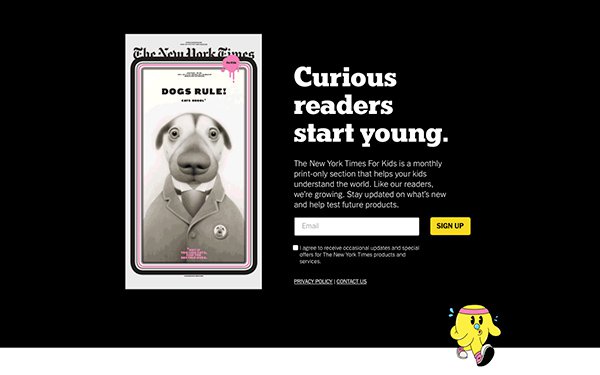 is testing a paid subscription model for a digital product called NYT Kids,” based on the section of the sane name in the print edition, according to Axios.

The Times has a paid sub model for its regular digital products, but this product for children is a departure."Until now, we've been focused on a certain age, but that mission isn't limited to adults or teens,” states David Perpich, head of standalone products at the newspaper, per Axios.

The paid product would include how-to content on crafts, recipes and physical activities, among other things.   Details on pricing were not specified. But The Times is apparently planning to develop a standalone app.

The new offering will not display advertising, and the publication is working to ensure NYT Kids will be compliant with children's digital online privacy laws.

Despite reports that the newspaper was mulling paid subscriptions for email newsletters, it was not clear if NYT Kids would follow such a model, but it seems unlikely.

Still, 84.1% of consumers are unwilling to pay for newsletters, even if the content is the kind they like the most, according to a recent survey by What If Media Group. And 79.6% would rather access ad-supported content for free than pay for ad-free content.

Media giants such as The Times can get away with charging for digital content in general. But “the subscription-based model opportunity for smaller publishers is practically nonexistent,” the study observes.