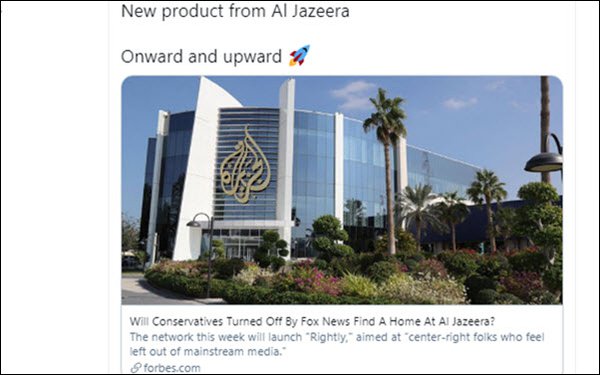 The company — which shuttered its unsuccessful left-leaning cable channel Al Jazeera America five years ago — says that the new digital platform, dubbed Rightly, is not aimed at the far right, but at “center-right folks who feel left out of mainstream media.”

Yesterday, on Twitter (above), the network’s Digital Executive Director, Yaser Bishr, linked to a Forbes article asking, “Will Conservatives Turned Off by Fox News Find A Home At Al Jazeera?”

The platform’s editor-in-chief, Scott Norvell, is a Fox News veteran who left in 2012 after 16 years.

On Twitter, when asked why there is a need for another conservative media voice in the U.S., Kent responded: “Have you turned on the news since 2015?”

“Al Jazeera is excited to expand its digital footprint with Rightly to provide fresh voices that are too often left out of the mainstream media a space to engage and debate the issues that matter most to them,” said Michael Weaver, senior vice president of business development and growth at Al Jazeera Media Network’s Digital Division, in a statement from the network. “Rightly will also be a platform where the full spectrum of political voices can expect to have, or find, a thoughtful debate on the future of the United States.”

Meanwhile, Fox News News Media, through its new streaming service, has donated $250,000 as one of the top corporate sponsors of this week’s Conservative Political Action Conference in Orlando, Florida, reports The Daily Beast.

The event is “a three-day partisan political confab featuring ousted president Donald Trump and a host of speakers on multiple panels pushing the big lie that President Joe Biden was fraudulently elected,’ asserts the left-wing Beast, which says some Fox staffers view the sponsorship as a “desperate” move by a network looking to “pander” to MAGA diehards.