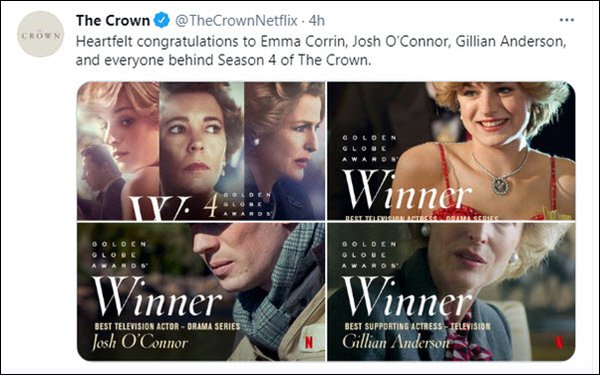 Netflix dominated this year’s Golden Globes, with nine wins across television and movies.

Streaming services as a whole took home more than 70% of the television awards.

Netflix — which advanced its competitive advantage by continuing to churn out original content throughout 2020 despite the pandemic-driven production problems that plagued other streamers and traditional studios — won six of the 11 available TV awards and three film awards, after being nominated for 20 TV awards and 42 overall.

“The Queen’s Gambit” won for Best Limited Series, and Anya Taylor-Joy for Best Actress in the category.

Apple TV+ won its first Globe, for Jason Sudeikis, who took Best Actor in a Television Series, Musical or Comedy for the comedy series “Ted Lasso.”

Mark Ruffalo won Best Actor in a Limited Series for HBO’s  “I Know This Much Is True,” also shown on HBO Max.