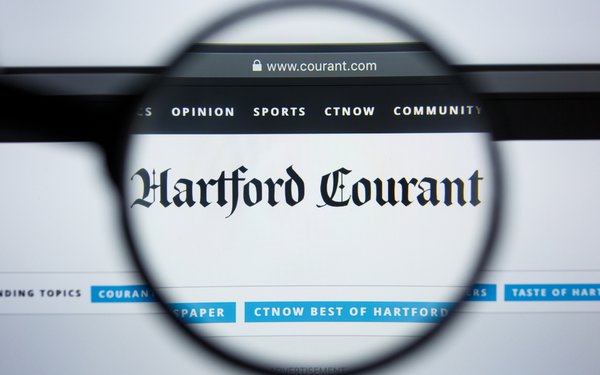 A Connecticut legislator, upset over the pending takeover of The Hartford Courant by Alden Global Capital, has introduced a bill that would give the state a role in the newspaper’s finances, according to a Courant story.

However, the bill is being opposed by the newspaper’s editor in chief.

The Courant issue came up in a hearing this week in the legislature.

The bill introduced by Sen. Matt Lesser (D-Middletown) would give the state Attorney General and readers who have subscribed to the paper for a year the ability to mount court challenges to moves that are “not in the public interest,” the Courant reports.

In addition, it would prevent Alden from incurring debt or issuing dividends that are  not in the public interest, a move to prevent the wringing of cash out of the Courant, the paper continues.

However, the bill is opposed on First Amendment grounds by Courant publisher and editor in chief Andrew Julien.

“The founders understood that democracy required a free and open exchange of ideas — and that the single greatest threat to that was the potential for government interference,” Julien said in written testimony, according to the Courant.

Giving the Attorney General or the courts the ability to decide if a paper is acting in the public interest “undermines that fundamental tenet,” Julien argued.

But Lesser contends the Courant, which was founded in 1764, has a history of legislative involvement, starting with the granting of a business charter in 1887 and revised several times, most recently in 1951.

Another type of challenge may be coming from Stewart W. Bainum Jr.,  who controls the nonprofit group that signed a nonbinding agreement to acquire The Baltimore Sun and other Tribune Publishing properties in Maryland.

Bainum, the chairman of Choice Hotels International, may put up a bid for Tribune Publishing. He is personally willing to commit $100 million if he can interest other investors.

This disruption took place as Bainum and Alden were butting heads over the operating agreements for shared back office operations for the Maryland papers, The Baltimore Sun reports.