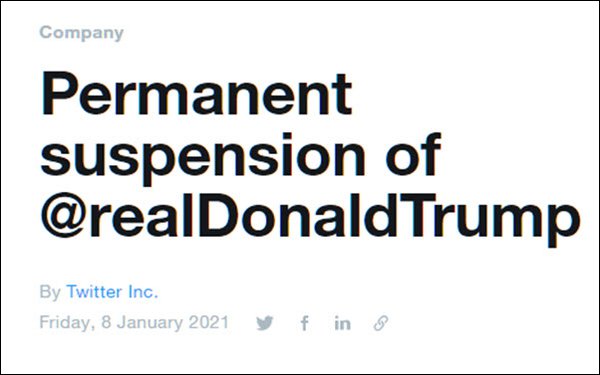 Donald J. Trump is readying a return to social media, via his own platform within “probably two or three months,” according to his senior advisor Jason Miller.

The in-development platform will be “the hottest ticket in social media,” attracting “tens of millions,” Miller claimed during an appearance on Fox’s "Media Buzz" on Sunday.

At the same time, he said that Trump was still having a "a lot of high-powered meetings" at Mar-a-Lago, having been approached by “numerous companies” about starting a social platform.

“I think the president does know what direction that he wants to head here," Miller added.

After the Jan. 6 insurrection at the U.S. Capitol, Trump’s account, despite its nearly 89 million followers, was permanently suspended by Twitter over “risk of further incitement of violence.”

On Jan. 21, Facebook Inc. asked its official “independent Oversight Board” to review Trump’s suspension. Trump appealed to the board, which has yet to issue a decision on the matter.

Although many had speculated that a decision would come much sooner, the board has 90 days to make a decision. That would make April 21 its official deadline.

According to Facebook, the board’s decisions can’t be overruled by Zuckerberg or anyone else at the company.

However, a watchdog group that calls itself “the Real Facebook Oversight Board” contends that members of Facebook’s official Oversight Board can’t be regarded as independent, because they “are being paid six-figure salaries by Facebook.”
facebook, politics, social media, twitter
1 comment about "Trump Will Soon Launch Own Social Platform, Says Advisor".
Check to receive email when comments are posted.
Next story loading