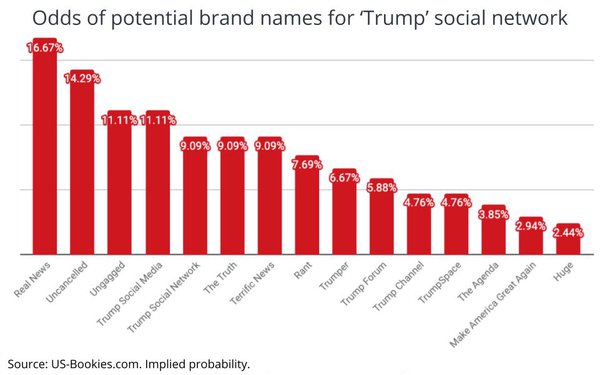 With an implied probability of only 2.44%, oddsmakers predict the impeached former president's new social network will not be "Huge," literally.
With odds of 40/1, the name "Huge" ranked last among 15 potential brand names for a "Trump" social media platform, according to an analysis by US-Bookies.com.

The most probable name: "Real News," which while ironic, currently has the best odds at 5/1.

“With Trump announcing he will be creating a new social media platform in the next two to three months, it looks clear that the former president is relishing the opportunity to compete with the likes of Facebook and Twitter, the latter having permanently banned Trump earlier this year,” a US-Bookies spokesperson noted in the announcement of the odds, which are being released for "illustrative purposes" and are not intended for actual wagering.

“The former president’s tendency of putting his name front and center in business ventures" also makes Trump Social Media (8/1 odds) and "Trump Social Network (10/1 odds) near the top of the list, just behind "Uncanceled" (6/1 odds) and "Ungagged" (8/1 odds).