'Forbes' To Auction Winklevoss Cover As An NFT 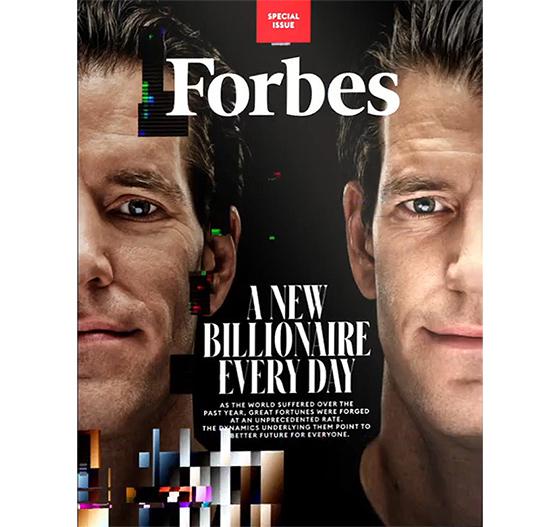 Forbes is doing what Time did a few weeks ago, offering digital cover art in the form of a non-fungible token (NFT) in an online auction, the magazine reported.

The art features Cameron and Tyler Winklevoss, brothers hailed in the cover headline as “Merchants of the Metaverse.” The cover photo was shot by Michael Prince and converted into NFT art by digital artist Yoshi Sodeoka.

The twins are an appropriate subject for an NFT, given they purchased Nifty Gateway, the platform on which the auction is being held, in 2019. They have also invested in 25 digital assets startups through their holding company Gemini Space Station.

“As we watch the rapid rise of cryptocurrency and its mainstreaming across the world, we’re capturing a unique moment in time and also playing a role ourselves,” states Randall Lane, Forbes Chief Content Officer.

Forbes will donate the proceeds to the Committee to Protect Journalists and the International Women’s Media Foundation.

NFTs are “a subset of cryptocurrency,” explains Brian Georgi, CRO at Boostr. However, unlike bitcoin, NFTs “store extra information unique in both substance and value,” Georgi adds. “As a result, one couldn't simply trade them at 1:1 value like one could with a standard dollar."

In March, Time auctioned off three iconic covers as NFTs: “Is God Dead,” “Is Truth Dead” and “Is Fiat Dead?”

Titled “Revenge of the Winklevii,” the Forbes article describes the standing of the brothers in this relatively new business.

“Much of the world still thinks of the 6-foot-5 twins as the crew-rowing chumps played by Arnie Hammer in 'The Social Network,' the hit 2010 movie about Facebook,” it states. “At Harvard, classmate Mark Zuckerberg had swiped their idea for a social-networking site, building an empire with 2.8 billion worldwide users and a personal fortune now worth $97 billion.”

The brothers settled with Zuckerberg for $65 million in Facebook stock and cash 12 years ago, but now have combined assets of $6 billion and have emerged as “leaders of a technological movement whose core operating principle involves digitizing the records of all assets globally, decentralizing control and cutting out gatekeepers — including Facebook,” the article continues.

The cover auction will start at 1:30 p.m. on Wednesday and end 24 hours later.