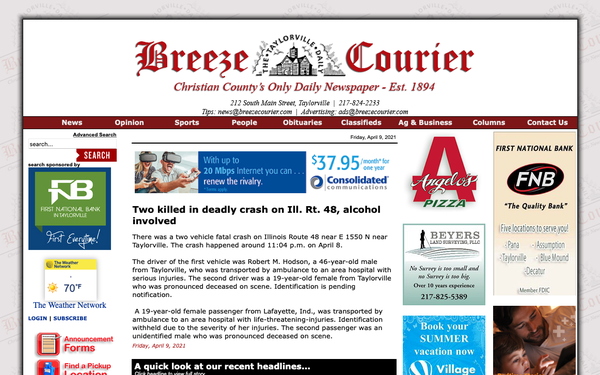 Newspaper consolidation is occurring among small local newspapers as well as big-city dailies.

“This is an exciting time for us,” states Greg Hoskins, owner and president of Better Newspapers. “My staff and I are looking forward to the challenges and, more importantly, meeting the needs of the community.”

Founded in 1991, Better Newspapers is a family-owned company that now runs 26 publications in Illinois and Missouri. The first to be acquired were the Mascoutah (Illinois) Herald, Clinton County News, Fairview Heights Tribune and Scott Flier, serving Scott Air Force Base.

Hoskins went on to purchase Altamont News, Arthur Graphic, Clarion; Record-Herald News in Arthur; Bond and Fayette County Shopper; The Shoppers Review in Highland; The Nashville News, The Troy Times-Tribune and The Journal and the Tri-County Journal, the latter two both in Tuscola; The Leader Union in Vandalia, Southern Champaign County; Today in Villa Grove, and the Illinois Business Journal, a monthly business publication.

In 2012, Hoskins built a regional press plant in Altamont and uses it to print his own publications and other newspapers in the area.

Hoskins’ wife Linda works in the firm’s editorial department. Son Scott Hoskins is the Metro East general manager, and Scott’s brother Mark is the regional manager for the press plant in Altamont.