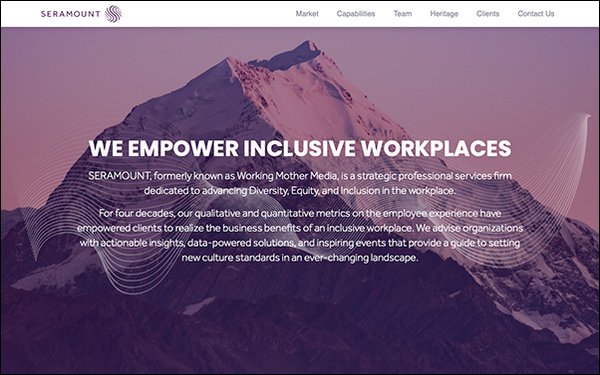 Bonnier Corp., the owner of several enthusiast brands, including Working Mother, has launched Seramount, a platform that will provide diversity services to companies.

Subha V. Barry, former president of WMM, will serve as CEO of the new enterprise.

Barry’s group at Bonnier has “long outgrown the Working Mother name, and now, the new entity Seramount is perfectly positioned to be a leader across the entire spectrum of the DE&I space,” states David Ritchie, CEO of Bonnier Corp.

Richie reports “this portfolio has experienced remarkable growth and success, thanks to Subha and her seasoned and passionate leadership team.”

For her part, Barry states Seramount hopes to make “belonging a baseline at every company. She contends Seramount represents “the evolution of an enduring legacy supporting and advancing women in the workplace over the past 40 years.”

The name Seramount is inspired by Mount Saramati, an Asian mountain peak. The unit’s logo new logo reflects a topographical map of the mountain and a human fingerprint.