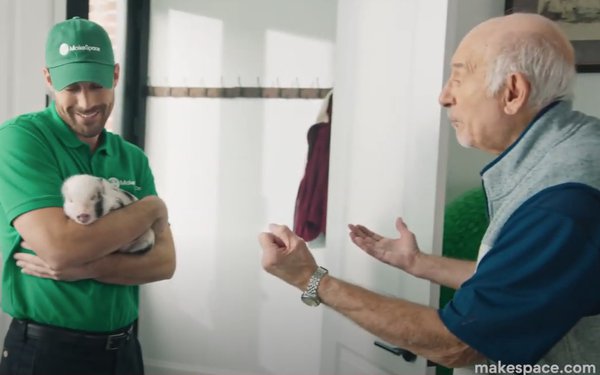 MakeSpace is doubling down on its humorous attempts to be top-of-mind in the storage business, as pandemic-related downsizing and moving converges with spring-cleaning season.

The company’s latest campaign aims to inform businesses and everyday people that it will store just about anything—the big exception being farm animals.

It’s part of an upper-funnel marketing strategy based on the reality that at any given moment, only 10% of American households have something in storage, according to MakeSpace vice president of brand Matt O’Dowd.

“Storage is not one of those things anyone is thinking about until the moment of dire need,” O’Dowd tells Marketing Daily. “We have found success by having a little fun and bringing levity into this super-stressful situation.”

MakeSpace was launched in 2013 in response to the flooding and other long-term devastation caused by Hurricane Sandy on the East Coast in the fall of 2012.

One of the company’s main points of differentiation is that customers can use an app to order storage bins and then notify MakeSpace when they want them picked up. After items have been stored, they can be shipped to other locations.

In this spot, a man makes his way through a dimly lit facility to the backdrop of creepy music. When he opens his unit, he finds two rodents feasting on what appears to be fried calamari.

In the current campaign, the animals are larger and not the least bit scary. Now the messaging is about “storage without the struggle.”

The voiceover in this 30-second spot from Quirk Creative advises a goat-owning woman that “No, for the last time, we won’t take your farm animals.” Likewise, a business owner is informed that “your baby kangaroos, we don’t want to hear about.”

Finally, as a MakeSpace worker cradles an elderly piglet in his arms, the voiceover notes “we don’t want to store your piglets because, well, we get attached.”

In addition to campaign spots running on linear and OTT television, MakeSpace will deploy out-of-home advertising in the coming months, according to O’Dowd.

“One of the big assets for us is we have trucks rolling in 31 different markets that are branded with MakeSpace. That ends up being a big driver of awareness.”