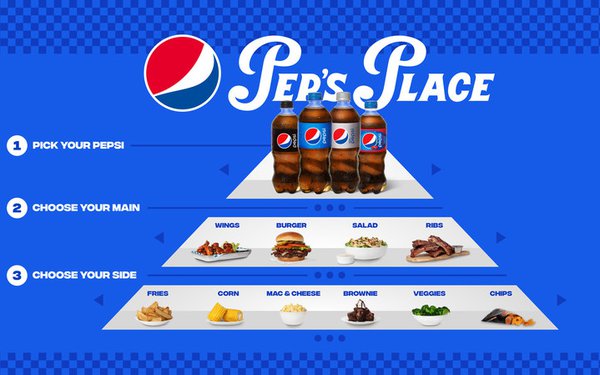 With its U.S. food-service business still on the decline, Pepsi seems to be hoping that partnering with ghost kitchens can fill some of the slack.

The company on Monday launched what it described as a “fast-beverage” restaurant called Pep’s Place.

Visitors to PepsPlaceRestaurant.com are first encouraged to choose from a variety of Pepsi beverages. Their selection triggers suggested, complementary food items: for example, Pepsi Zero Sugar “pairs gracefully” with a chicken Caesar salad.

The food and beverages are delivered by DoorDash, Grubhub and Uber Eats and also can be ordered via these companies.

Thus far, Pepsi appears to be promoting the existence of Pep’s Place strictly on social media platforms, including Instagram.

A one-month initiative, Pep’s Place provides delivery in 25 states, according to the website. Pepsi did not disclose how many ghost kitchens it’s working with.

Asked why Pep’s Place is limited to 30 days, a Pepsi rep tells Marketing Daily, “Pep’s Place is an experience unlike anything Pepsi has done before and a new endeavor for the brand. During the 30 days, the Pepsi team will gather learnings to continue to add value to future co-marketing programs created in partnership with Pepsi’s foodservice customers.”

In the first quarter ended March 20, PepsiCo Beverages North America reported that its food-service business “continued to decline at a double-digit rate.”

On a conference call with financial analysts on April 15, PepsiCo chairman and CEO Ramon Laguarta was asked about consumer dining habits going forward.

He said the company will have “more information about consumer behavior in the next few months as consumers decide how much they go back to working offices, how much they venture out for some of their meals during the day,"Laguarta answered. “I think the consumer will show us more as we go along in the next, I would say, six to nine months.”