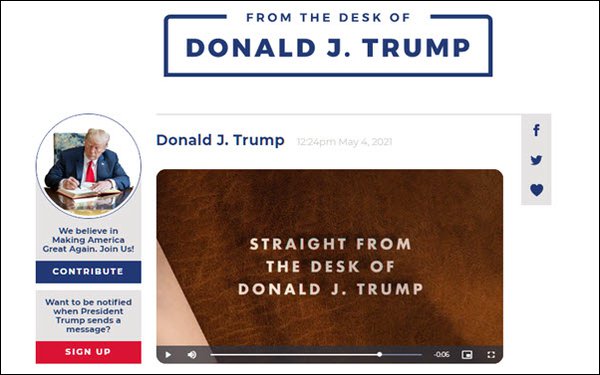 Barely a day before a much-awaited decision about his fate on Facebook, Donald Trump launched a “communications” website.

Dubbed “From the Desk of Donald J. Trump,” the site is designed to promote the former president’s messages, but does not enable interaction with its users.

On Twitter, Trump spokesperson/advisor Jason Miller confirmed  that this site is not the social media platform that Miller said in March was to be launched “probably within two or three months.”

Miller tweeted that more information about that social platform will now be coming “in the very near future.”

Meanwhile, the new site is “a great resource to find [Trump’s] latest statements and highlights from his first term in office," he said.

In addition to Trump’s written statements since leaving office, the site enables him to post images and videos.

Facebook’s Oversight Board is set to issue its decision about whether Facebook and Instagram will continue or lift their bans on Trump on Wednesday morning.