McDonald's Joins Massive 'We Can Do This' Campaign 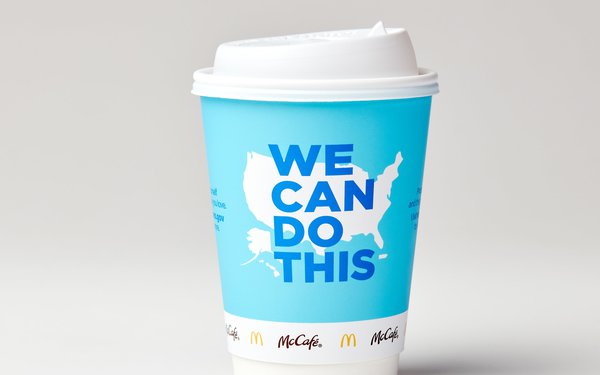 Can we do this? As America increasingly confronts the estimated 22% of the population reluctant to get vaccinated against COVID-19, McDonald's thinks we can. It is joining in the federal government's massive new ad campaign to encourage vaccination against COVID-19.

Themed "We can do this," the new effort from the Biden Administration joins other pro-vaccine efforts, such as Walgreen's "This is our shot" and the Ad Council's "It's Up To You," in partnership with Walmart, Walgreens and CVS Health.

McDonald's says it plans to introduce a Times Square billboard later this month and is also using McCafé cups and McDelivery seal stickers to spread the word. Those lead people to vaccine.gov, the U.S. site that provides information on vaccine availability.

The move comes at a pivotal moment in the pandemic. The vaccine supply is surpassing demand in many states, and public-health efforts now focus on winning over those who are still vaccine-hesitant. That number continues to gradually decline, with the latest from the University of Pittsburgh reporting it fell to 22% in March, from 27.5% in January.

That study, based on more than 730,000 online responses, finds that resistance is still driven by safety concerns, worries about side effects and distrust in government. It's also largely impacted by people's line of work, with hesitation higher in blue-collar careers.

"This is a team effort -- it takes all of us," says Genna Gent, McDonald's USA vice president for global public policy and government relations, in its announcement. "McDonald's is excited to be doing our part for the people we serve, providing them with simple information that can help keep them safe."

The effort also bolsters the Chicago-based fast-food giant's effort to encourage employees to seek the vaccine. Like many large employers, it's offering employees some incentives, including four hours of paid time. It's also hosted a vaccination clinic at its Chicago headquarters.

While McDonald's own bounce-back to the pandemic has been solid, the restaurant industry -- even QSR and drive-through -- continues to be vulnerable to further spikes.

In his latest report on McDonald's, Morningstar analyst Sean Dunlop notes it has had a "slightly quicker recovery than anticipated in the U.S., with comparable-store sales up 13%."

The company's recovery has been "boosted by stimulus spending and February's chicken sandwich launch," he writes. Its digital efforts are paying off, generating $1.5 billion through digital channels, or about 14% of U.S. sales in the most recent quarter. (That includes food ordered through the mobile app, kiosks and for delivery.)