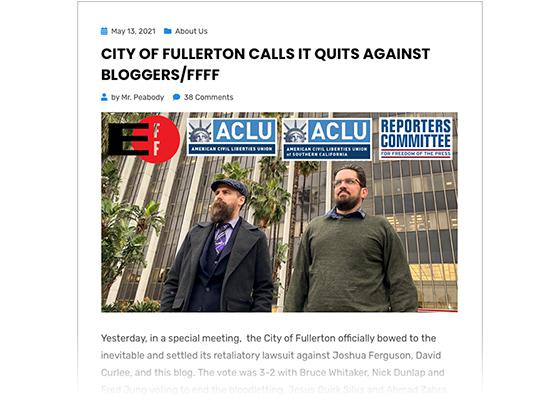 The City of Fullerton, California, has dropped a lawsuit against two bloggers for publishing police misconduct records, in a victory for First Amendment advocates.

The municipality will pay $350,000 to settle the civil case it filed in 2019 against bloggers Joshua Ferguson and David Curlee from the website Friends for Fullerton’s Future. And it will retract and apologize for allegations that Ferguson and Curlee were guilty of criminal hacking.

According to Associated Press, the suit alleged that Ferguson and Curlee had stolen digital personnel files form a shared drive they had mistakenly been given access to.

The bloggers published some of the files in question, including those of a rogue cop, the AP reported.

These documents, from an internal police department investigation, allege that a former city manager got a ride home from Fullerton police after drunkenly wrecking his car on election night in 2016, Voice of OC reports.

According to that report, the city acknowledges in the settlement that “documents were not stolen or illegally taken from the shared file account as the City previously believed and asserted. Rather, the documents were made inadvertently available by the City’s response to [public records] requests.”

“The city shouldn’t have tried to blame their mistakes on journalists trying to cover the city,” concludes Kelly Aviles, attorney for the bloggers, according to AP.

The apology will appear on the city's site.