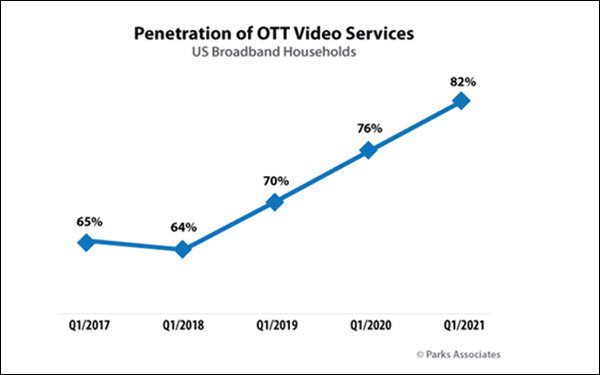 This week brought more eyebrow-raising indicators of just how quickly streaming is growing — particularly now that ad-supported streaming services are taking off.

Exhibit 2: Andy Forssell, executive vice president-general manager of HBO Max, declared that, with ad-supported versions of premium streamers now emerging, the U.S. “should get back to 100 million-plus homes” — the number served during heyday of cable TV.

Currently, cable and other pay-TV households number about 80 million.

Netflix, which has 74.4 million U.S. subscribers, is “probably defining the ceiling on what full penetration in the U.S. market is and they're riding that up,” he said. “They are propelling that wave along with the rest of us.”

According to Forssell, while HBO Max is growing rapidly, WarnerMedia is less concerned about growth speed than achieving grow in the most “premium” way possible.

There’s no arguing with that philosophy, or at least there shouldn’t be. Presumably, he’s referring to achieving a balance that maximizes uptake for the premium, no-ads version of Max, as well as keeps the price/value proposition of the with-ads tier at a level that drives its sub volume and enables optimizing its advertising rates.

On that front, aside from investing in content, HBO Max’s decision to launch with an ad load of four minutes or fewer per hour — like the five-minute upper limit set by NBCUniversal’s ad-supported Peacock — is the most important move they could have made to maximize signups.

Yes, it's true that even now, many people will put up with quite a bit to get quality content free or at a fairly low cost.

Only after decades of being subjected to endless advertising pods during every hour that they watch most cable TV stations, while at the mercy of frequent price increases — and only when they started to have other options — did consumers begin cutting the cord in large numbers.

But the lesson is this: They finally did.

If advertisers and media companies start pushing up those ad loads and/or injecting more and more product placements and other supposedly “seamless” brand promotions into streaming content, viewers -- especially those paying even a nominal fee for a subscription -- may prove less patient this time around.