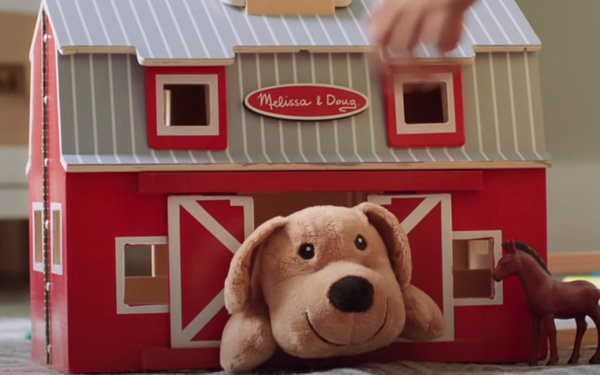 After more than a year of watching technology overpower kids’ lives, toy brand Melissa & Doug is launching its first-ever brand campaign. The new ads focus on the power of screen-free play to fire kids’ imagination,

The company has been selling its toys for more than 30 years and has become a favorite of millennial parents. But as stressed-out moms and dads worry about the impact of the pandemic on their children, the company decided it was time to move beyond its decades-old word-of-mouth strategy.

“While technology was undoubtedly necessary for keeping us all connected during the pandemic, we know many parents have real concerns about the amount of time kids are spending on screens,” says Bridgette Miller, global head of marketing, in an email interview. “They are looking to engage their kids and keep them learning in active, hands-on ways.”

It’s not that the company is anti-tech, she says. But parents are struggling to find balance.

“Right now, we’re finding that parents have a renewed appreciation for the kind of exploratory, hands-on play that pediatricians say is best for kids and that Melissa & Doug has long championed.”

Themed “Timeless Toys. Endless Possibilities,” the main idea behind the new campaign is that it isn’t so much the toys that matter, but the pretend play the toys inspire. Edelman New York created the ads, which are running digitally on Amazon, Hulu and YouTube, as well as social platforms like Pinterest and Instagram.

The company is aiming the campaign at parents with kids under 4.

Spots feature a little girl who sends her stuffed dog on a journey through the brand’s farm- and firefighter-themed toys.

Miller hopes the campaign will have an impact on parents who are already aware of the brand, as well as first-timers.

The company, based in Wilton, Connecticut, specializes in wooden pretend-play toys, developmental products, puzzles and crafts. It sells its toys in 130 countries. It also partners with the American Academy of Pediatrics’ Power of Play alliance, which fosters early brain development and open-ended play.