GroupM: PACs Now Rank As One Of The Biggest Standalone Ad Categories 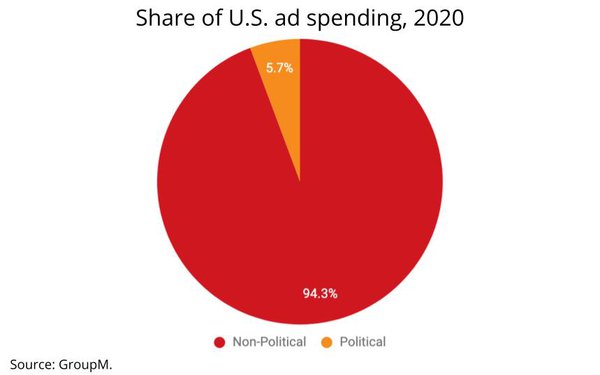 Political action committees, or PACs, now represent one of the biggest ad categories in the United States, up there with retail, automotive, pharma, etc., according to the latest edition of GroupM's advertising forecast. And it's about to get even bigger.

Already, the agency estimates PACs represented more than half of total federal campaign spending in 2020, and while it didn't break that precise number out, GroupM estimates total political ad spending accounted for nearly 6% of the $239 billion spent in the overall U.S. advertising marketplace in 2020.

"With control of the U.S. Congress once again up for grabs in 2022, we will be looking at another massive year for political advertising," GroupM's Business Intelligence team notes in the new report, which projects political ad spending will total nearly $11 billion in 2022, or approximately $5.5 billion in ad spending by PACs.

That's potentially a lot of dark money that will be influencing voters in 2022, and obviously doesn't include the organic content PACs will spread over the next year-and-a-half.