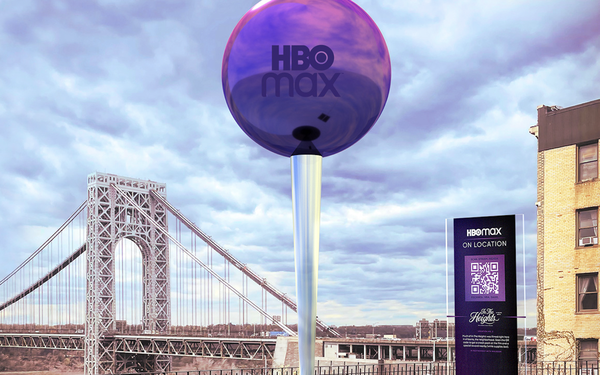 With post-pandemic New Yorkers back out crowding the streets again, something else MIA from last year is also returning: the out-of-home marketing installation.

In one category alone -- subscription streaming services -- two brand leaders are hitting up the Big Apple this month with pop-up events on separate weekends.

HBO Max has teamed with Lyft’s Citi Bike rentals and the city’s tourism organization NYC & Company for “HBO Max on Location” on June 11-13. The event features a self-guided tour of the Washington Heights neighborhood that inspired the new Lin-Manuel Miranda musical, “In the Heights,” as well as locations throughout Manhattan associated with 13 other HBO Max movies and series.

Participants can go to any of the 20 highlighted locations from 10 a.m. to 8 p.m. each day, find a “giant purple pin” and scan its QR code to both unlock video content (scenes/clips/trailers from the HBO Max series or film affiliated with each location) and receive specific partner offers from each location on a first-come, first-served basis.

At four of the locations (Riverside Park for “You’ve Got Mail,” Penn Station for “Flight Attendant,” Pier 6 Helipad for “Succession” and Carl Schurz Park for “The Undoing”), participants get a free 30-minute bike rental which they can use to tour other promo sites around the city

Among other partner offers is a free cookie from Levain Bakery for those visiting the steps of the Metropolitan Museum of Art (locale for the upcoming revival of “Gossip Girl”); a free cupcake from Magnolia Bakery (“Sex and the City”), and a $5 discount at Katz’s Delicatessen (“When Harry Met Sally.")

“’HBO Max On Location’ is a great opportunity to provide a safe and fun interactive experience for fans of iconic HBO Max series and movies that also supports local businesses, in a city that has been severely impacted over the past year but continues to stay resilient,” stated Jason Mulderig, senior vice president, brand marketing, HBO Max and HBO.

HBO Max worked with Civic Entertainment Group for the “On Location” promotion. 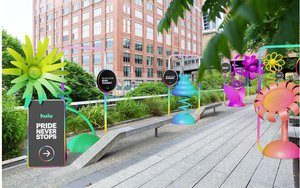 Visitors who scan the QR codes will enter a microsite where they can create a virtual flower and dedicate it to someone. For each virtual flower created, Hulu said it will donate $15 (up to $100,000 total) to go equally to four community organizations: The It Gets Better Project, GLSEN, Family Equality and Point Foundation.

Both the Hulu and HBO Max installations are connected with larger efforts tied in with the LGBTQ+ and Latino communities respectively.

Starting also on June 24, anyone anywhere in the U.S. (except South Carolina and Alabama) can go to hulupride.com to create their own virtual flowers that will also prompt a donation by Hulu.

In the #TellUsTuSueñito campaign, the owners told their stories in short videos for a social media campaign, with the campaign culminating June 11, with “In the Heights” and HBO Max Pa’lante! buying thousands of scratch-off lottery tickets from the three stores for them to give free to their customers.