The Most Valuable Name In News: MSNBC, Not Fox 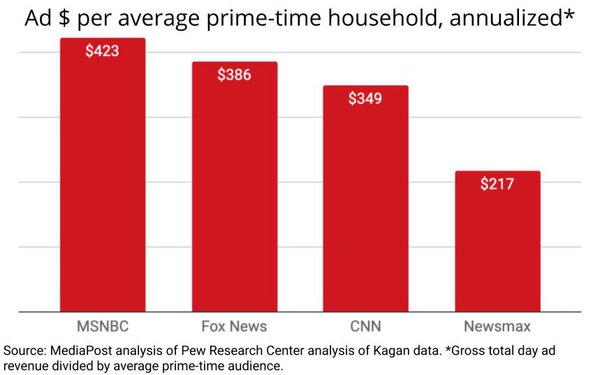 Fox News Channel may have the biggest average audience, as well as gross revenues of the cable news networks, but when it comes to a key Madison Avenue metric -- CPMs -- MSNBC is the most valued.

A MediaPost analysis of data released Tuesday by the Pew Research Center analyzing the 2020 audience size and economics of the major cable news networks, reveals that MSNBC generates an average of $423 per prime-time household reached annually, which is about 10% more valuable than the second most valued cable news network, Fox News' $386 per prime-time household reached.

So while Fox News has a significantly higher annual audience, as well as total revenues and profits, the ad industry actually values MSNBC more.

Interestingly, while Fox News also has the greatest profit margin (62.1%) when total revenues, including licensing fees are added in, MSNBC isn't far behind (54.7%), followed by CNN (42.9%). Relative newcomer, Newsmax, still is unprofitable, according to the Pew analysis, generating a loss of $1.5 million on gross revenue of $26.4 million.

2 comments about "The Most Valuable Name In News: MSNBC, Not Fox".
Check to receive email when comments are posted.
Read more comments >
Next story loading