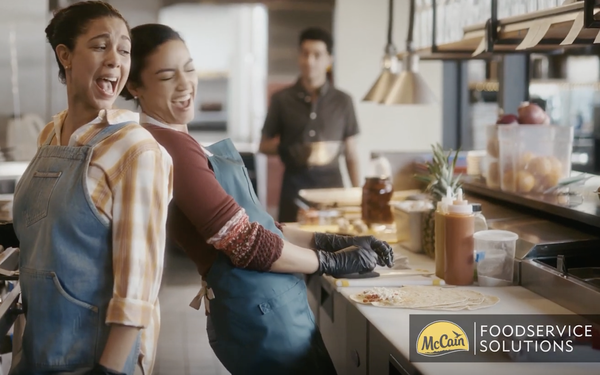 McCain Foods is taking an emotional approach to its B2B relations with foodservice providers by creating an “anthem” for returning restaurant workers.

The company’s biggest such initiative to date, “Time For Me To Fry” leverages the 1970’s REO Speedwagon hit song “Time For Me To Fly”as performed by actors portraying back-of-the-house restaurant employees.

This 90-second “Let’s Fry” video from the food- and beverage-focused Smiths Agency opens outside the North Shore Tavern in Pittsburgh.

As workers unload a food shipment and begin meal preparations, they sing along to the REO song—whose lyrics chronicle a high school couple’s breakup.

Line cooks lean into each other, back-to-back, as they sing “I make you laugh” while another cutting onions chimes, “you make me cry” and a colleague at the griddle looks up, dances and bellows, “I believe it’s time for me to fry!”

“We leveraged a simple insight that back-of-the-house restaurant workers use music to move them through their workday,” Lindsey Smith, Smiths Agency founder and chief co-creative director, tells Marketing Daily.

“With just a tiny tweak, REO Speedwagon’s ‘Time for Me to Fly’ gave us that post-COVID liberation anthem that we were looking for. It’s a break-up song that acknowledges heartache but celebrates what’s next.”

According to Smith, it’s a departure from traditional B2B marketing’s repertoire of sales materials and price promotions.

“B2B work is still human-to-human. This is about how can we bring more humanity and empathy to the work these guys are doing. It’s more of a brand-building play than just being about the latest coated fry or onion ring.”

Given the target audience of chefs and restaurant operators, a 30-second version of the commercial will reside on restaurant publication websites along with ads on Facebook and Instagram.

Asked how McCain will measure results of the campaign, Smith says it’s not about the usual KPIs. “I don’t think they’re expecting that the day this work begins to run they‘ll see an immediate return on their investment. We do have plans for bringing in additional, more targeted campaigns around specific products.

“This is our air cover—our 30,000-square-foot kind of awareness campaign to own the moment and put us on operators’ radar so the next time we come along with that new product, they’re much more receptive to it.”