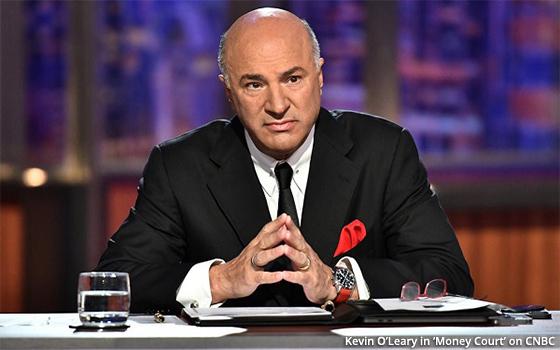 CNBC’s new “Money Court” is a great example of a good idea well-executed.

Premiering Wednesday night, the one-hour show has “Shark Tank” star Kevin O’Leary as the judge/mediator of disputes that real people are experiencing around money issues.

He is joined by two other panelists -- Katie Phang, a trial attorney, and Ada Pozo, a former judge, who provide input and also aid in the questioning of the “litigants” in these TV-court cases.

But the final decisions and the manner in which the disputes are to be settled belong to O’Leary alone. And like other court shows on TV, the litigants on “Money Court” have agreed to abide by whatever O’Leary decides.

Clearly, he is the star of this show, which is only fitting since he is also one of the stars of “Shark Tank,” the now 12-year-old entrepreneur-and-investing series whose episodes repurposed from their first runs on ABC are among the highest-rated shows on CNBC.

With that in mind, CNBC has developed a spot-on companion to that show with “Money Court.”

O’Leary’s outspoken presence on “Money Court” is the most conspicuous link between this new show and “Shark Tank,” but so are the disputes that O’Leary and his panel take up on this new and wholly original TV court show.

In the premiere episode of “Money Court” that I previewed this week, two out of the three cases heard during the hour had to do with entrepreneurs who were encountering conflicts with investors or partners at crucial points in the evolution of their businesses.

These two entrepreneurs were just the sort of people who go on “Shark Tank” to try and pitch their products to the “sharks” and persuade them to invest in their dreams.

In this way, “Money Court” can almost be seen as a sequel to “Shark Tank” in which the entrepreneurs are now making progress in the building of their businesses, but hitting financial snags along the way.

Let the record show that neither of the two entrepreneurs seen in the premiere episode of “Money Court” -- one an inventor of a leveling and measuring tool that helps homeowners correctly hang art and big-screen TVs on their interior walls and the other a designer of a new kind of insulated lunch container for schoolkids and adults -- were ever on “Shark Tank.”

But their passion and their challenges are the same as the “Shark Tank” hopefuls. And the advice or “settlements” devised by Judge O’Leary are derived from the same kind of practical business analysis he is known for on “Shark Tank.”

The best feature of “Money Court” is the one that we quality-starved consumers of TV content pine for -- namely, entertainment. The show moves at just the right pace, and the stories that the show’s producers have found and then developed into segments are interesting and relatable.

This is the kind of show I could have reviewed after one segment, but I liked the show so much, I watched the whole thing. It was great from start to finish. In short, I’m sold.