Twitter's Newsletter Subscribe Button Is Live - For Some Users 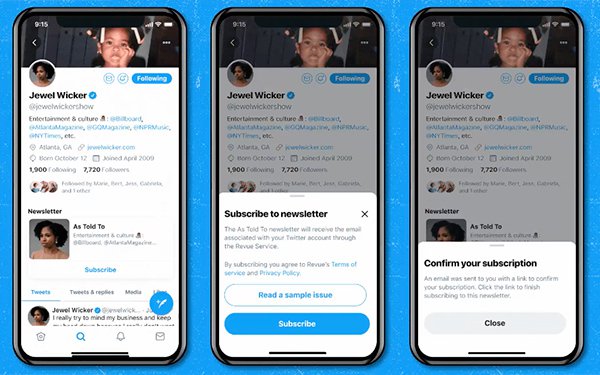 Revue, the email newsletter service acquired by Twitter in January, has debuted a subscribe button that will allow writers and publishers to offer newsletter subscriptions to their Twitter audiences — at least for some users.

“It’s here,” Revue says of the feature it promised in June.

“Today, we’re starting to test a feature that allows people to subscribe to your Revue newsletter directly from your Twitter profile,” the tweet continues. “It's available to all Revue creators immediately. To start though, your newsletters will show only for a test group on Twitter.”

The button resides under a call to action that says “Subscribe.” Readers will be sent an email asking them to confirm their subscriptions. It was not clear if the tool allows publishers to charge for their newsletters.

Techcrunch observes that, until now, Revue’s integration into Twitter has been minimal.

“We’re currently building new ways to grow your newsletter audience, and we want to preview one that will live right on your Twitter profile,” Revue said in June. “We want to give writers tools to turn their growing engaged Twitter audience into newsletter subscribers. This will be available for Revue newsletters soon, so stay tuned.”

Twitter also promised earlier this year it would pursue “an audience-funded model, where subscribers can directly fund the content they value most,” said Dantley Davis, head of design and research during a Twitter event.

The company announced a program called Super Follows that allows publishers and writers to charge for various content forms, including newsletters. Twitter/Revue will take 5%.

Also in June, Facebook launched Bulletin, a service that allows writers to self-publish their work and includes a tool to allow them to charge for newsletter subscriptions and website content.