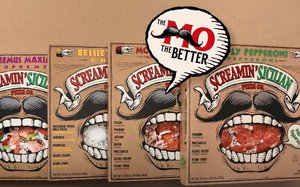 That’s the strategy behind Palermo’s new approach to marketing its Screamin’ Sicilian brand of frozen pizza.

The gist of the campaign is exemplified by creative dubbed “The Mo’ The Better” from Blue Chip, which became Palermo’s agency of record in late 2019.

The campaign’s target audience is “pizza-loving dudes with a maximalist attitude,” according to Blue Chip vice president and creative director Joel Walker.

“They play every video game to the nth degree, make televised sports a group event, and rage out loud when they party,” Walker tells Marketing Daily.

This 30-second video—shot in stop-motion format—calls attention to Screamin’ Sicilian’s abundance of cheese, sausage, pepperoni and other ingredients.

Stop-motion is “an especially engaging technique when your subject is food and recipe creation because the food is depicted as fresh, fun and energetic without a ton of reliance on food styling or on-camera talent,” says Walker. “The food is the hero because it's performing all of the action.”

Inherent in the campaign strategy is an attempt to change the conversation around frozen pizza while homing in on millennial males, according to Palermo’s senior director of marketing John Leonardo.

“This is a consumer group that in the frozen pizza category hasn’t been marketed to [before],” Leonardo tells Marketing Daily. “Most of the big brands are all going after Mom as the primary shopper and decision maker.”

Hence a shift in Screamin’ Sicilian’s media choices to platforms like Reddit, Snapchat and Twitch—which “align well with the consumer we’re going after.”

Prior to the onset of COVID-19, the brand began to test ecommerce platforms in a move that would prove timely.

“Kroger is a big customer of ours, so we thought it made sense to look at their ecommerce platform as well as Instacart, because it covers a wide spectrum of customers,” says Leonardo.

“We were getting some really good returns on our investment. As COVID hit and you saw a lot of people switch to online ordering, we ramped up our investment behind ecommerce and went heavier on those platforms.”

Palermo’s has been family owned since 1964. Screamin’ Sicilian was launched in 2013.