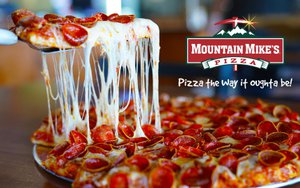 Football is back, and to celebrate the 75thanniversary of the San Francisco 49ers, Mountain Mike’s wants to toss big bucks to three lucky fans.

The Newport Beach, California-based chain says the effort celebrates both the Bay area’s oldest sports team and its status as the official pizza of the 49ers. (Of course, 49 points is a lot for a football game, especially given the 49ers' ho-hum 6-10 record last year.)

The contest is also a way for the company to generate some attention as it steps up its expansion plans.

Mountain Mike’s, best known for its kids’ play areas and the curly, crispy pepperoni it uses, is about to open its 250th location.

Its ongoing expansion comes on the heels of a very good year. While pizza restaurants have been among the strongest restaurant performers during the pandemic, it’s outperforming its peers. For the first six months of this year, Mountain Mike’s same-store sales jumped 16.4%, with total system sales rising 25.9% over the same period in 2020. Average annual sales are close to $1.1 million, with the top 50% locations averaging close to $1.3 million.

The company also announced plans to expand into Texas, with three franchises expected to open in the Dallas/Fort Worth area. It says other deals are in the works, and it expects the Lone Star state to become its biggest market in the next few years, after California.

Despite Texas’ fast-growing population, the company says, pizza hasn’t kept pace, with one of the lowest per-capita pizza places in the country, making it ripe for expansion.

It’s also developing expansion plans in eight Western states and plans to have a total of 25 new locations open by the end of 2021.