As Dine-In Builds, Chipotle Ramps Up Engagement Via Loyalty TikTok 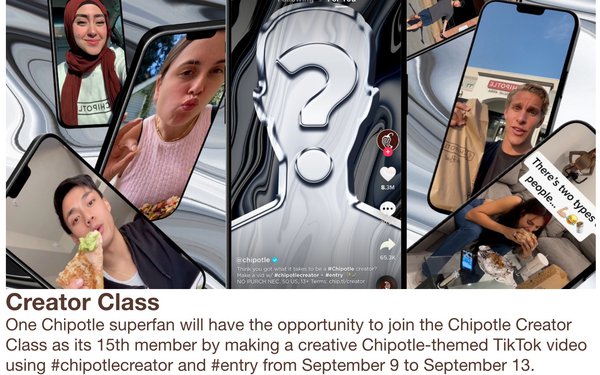 On social media, last month Chipotle doubled down on TikTok with a new Creator Class program to reward and more deeply engage with 14 of the chain’s existing influencers on the platform, while selecting a 15th.

Digital sales in the period ended Sept. 30 increased nearly 9% year over year—to $840 million—or about 43% of sales.

“We continue to retain about 80% of digital sales but have now recovered nearly 80% of in-restaurant sales,” Chipotle chairman and CEO Brian Niccol said during an earnings call last week. “While COVID impacts will likely persist for a few more quarters, we are hopeful that the worst is behind us and society can shortly return to a more normal environment.”

According to place-based data provider Placer.ai, monthly visits to Chipotle U.S. restaurants in June rose above 2019 levels for the first time since the start of the pandemic. The chain experienced a 12.2%, 7.5% and 2.7% year-over-two-year increase in visits in July, August, and September, respectively.

Year-to-date digital sales of nearly $2.7 billion “are just slightly below the $2.8 billion we achieved during all of last year,” said Niccol.

Loyalty program members increased to more than 24.5 million in Q3.

“No doubt, the loyalty program has moved from a crawl to the walk stage and we still have a lot of room to grow,” Niccol added.

On Sept. 1, the chain added what it calls Extras to Chipotle Rewards—shortening the time period in which members can earn free food.

Extras “gamifies” rewards with personalized challenges that can result in extra rewards points  and/or achievement badges in order to drive engagement.

It builds on Chipotle’s Race To Rewards challenge in June—an interactive game that rewards members who competed to earn points and potentially win a 2021 Tesla Model 3.

On Sept. 9, Chipotle announced the formation of the Creator Class program to “supercharge” its fans on TikTok.

In selecting the first 14 members, the company said they would be rewarded going forward for participating in virtual brainstorming sessions to “share concepts, ideas and strategies to help build the future of the brand and the creator economy.”

Georgia resident Wyatt Moss wasn’t motivated by the opportunity to become the 15th Creator Class member when he and two friends drove through the lower-48 states and flew to Alaska and Hawaii in 50 days—eating at various Chipotle locations along the way.

Moss posted a compilation video of the trip on TikTok on Sept. 13—four days after Chipotle announced the launch of Creator Class.

In a global TikTok-commissioned Nielsen survey of more than 8,000 people ages 18-plus, an average of 64% of TikTok users said they can be “their true selves” on TikTok.

According to the study, users in Canada, Brazil, Indonesia and Russia “all feel equally comfortable about being themselves on TikTok.”