Analysis: Facebook Has No Quantifiable 'Ethics,' Takes No 'Responsibility' 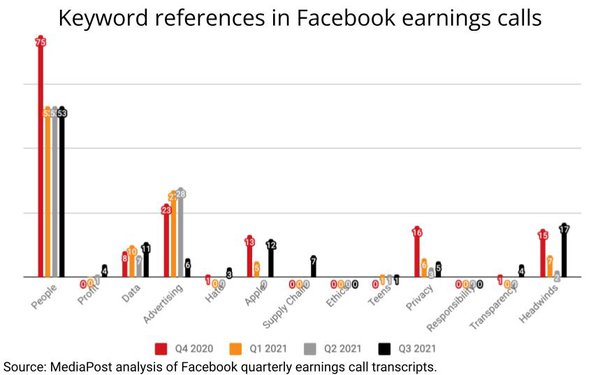 Facebook has no ethics, literally. And it takes zero responsibility. That's what I found when -- just for gits and shiggles -- I did some keyword indexing of its recent quarterly earnings calls.

The words "ethics" and "responsibility" never came up -- not once -- in any of its earnings calls over the past year. The word "transparency" did come up -- once in its Q4 2020 earnings call and four times in its most recent one for its third quarter earnings.

What does come up a lot is its primary inventory, "people," as well as "advertising" and "data." And what's been coming up a lot more lately has been "headwinds," "Apple," and not surprisingly in its most recent call, "supply chain."

Why do this and what does it mean? Well, personally, I think the corporate rhetoric publicly trade companies use when speaking openly to investors and analysts speaks volumes about what they think about themselves, and what they want others to think about them.

On that note, Facebook execs have suddenly begun chortling "metaverse" quite a lot: 20 times in their Q2 call and 11 times in the most recent one. Which makes me think there's a good chance we'll see that incorporated the company's brand reboot, whenever that actually happens.