Why Meta Wants The Universe: It's The Hardware, Stupid 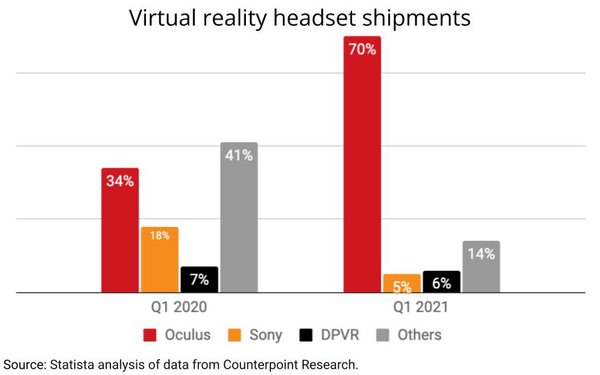 For all of Mark Zuckerberg's talk about "creativity," "interaction," and "commerce" he plans to unleash vis a vis Meta's new focus on the metaverse, it's really a certain form of commerce that he's likely talking about in the short-run: hardware sales.

Facebook has long longed for a piece of the consumer electronics marketplace, but has largely failed with products like its Portal gear. But Facebook also made a big bet by acquiring pioneering virtual reality headset developer Oculus seven years ago for $2.3 billion and it's finally paying off.

While Facebook has never broken out Oculus' revenues, it includes it in its "other revenues" category alongside Portal, and in its recently third-quarter earnings release reported those revenues nearly doubled to $734 million, beating Wall Street's consensus estimate projections of $473 million.

In fact, Oculus' share of the overall VR/XR (extended reality) headset marketplace has also doubled, jumping to 70% earlier this year form 34% a year earlier, according to estimates reported by Statista and Counterpoint Research.

Why should this matter for Meta's rebranding and refocus on the metaverse, because VR headsets like Oculus are the way people will be getting on it -- at least until some, as-yet-unimagined technology emerges to replace it.

"The virtual reality business is still a small market, but one that Mark Zuckerberg and his company are betting on big time," Statista analyst Katharina Buchholz writes in the report, noting that Oculus' Quest 2 headset already is the best-selling one, with about 4.6 million shipped to date.