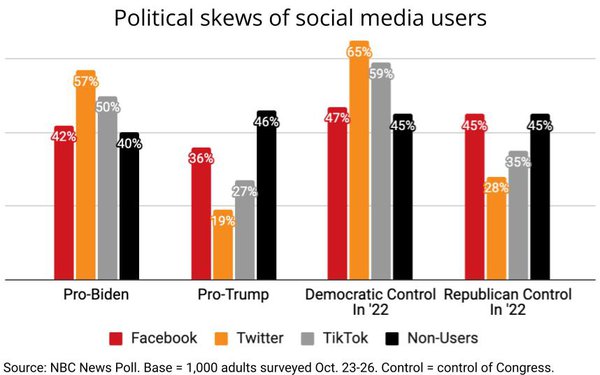 Users of Twitter and TikTok are more likely to be progressive Democrats than users of Facebook and non-users of the social media platforms, according to a new NBC News poll.

The survey found 69% of adults reporting that they have a Facebook account, versus 28% and 27%, respectively, having Twitter or TikTok accounts, and another 27% having no accounts on these platforms.

In addition to skewing younger, those with Twitter and TikTok accounts are more likely not only to be Democrats, but to have supported progressive candidates Bernie Sanders and Elizabeth Warren rather than Joe Biden during the 2020 Democratic primary race.

In the survey, Facebook users' responses tended to be quite similar to those of "all adults" and "all voters."

For instance, 42% of all adults and the same percentage of Facebook users said they approve of President Biden's job as president, versus 57% of Twitter users and 50% of TikTok users. (Forty percent of non-users expressed this opinion.)

And while 47% of all voters and the same percentage of Facebook users said they would prefer that Democrats control Congress after the 2022 midterm elections, 65% of Twitter users and 59% of TikTok users expressed that view.

Meanwhile, 45% of both all voters and Facebook users expressed a preference for Republicans to control Congress after 2022, and 38% of all adults and 36% of Facebook users expressed positive feelings about former President Donald Trump, versus just 19% of Twitter users and 27% of TikTok users. (Forty-six percent of non-users expressed this sentiment, even though they are virtually split on whether they want Democrats or Republicans to control Congress after 2022.)

Takeaway: "If you’re getting your political news from Twitter, seeing what’s trending on the platform, or trying to influence the debate there, you’re missing out on a good chunk of the country," notes NBC's analysis.