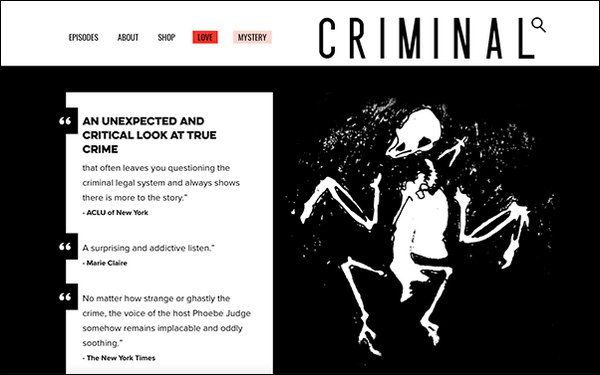 Criminal Productions was founded in 2014; it is independently owned and based in Chapel Hill, NC. Critically acclaimed, it has launched three successful podcast franchises that garner millions of downloads a month. That's highlighted by its breakout narrative series "Criminal," one of the first and biggest true-crime podcasts. The company also produces the series "This Is Love" and the daily program "Phoebe Reads a Mystery."

In a story published yesterday on Voxmedia.com, Vox said Criminal will join the Vox Media Podcast Network, and through that affiliation, more than double its staff, expand Criminal into a weekly show, and launch new serialized shows.

“After making these shows independently for the past seven years, we are delighted to join the talented journalists and podcast team at Vox Media,” Judge said. “This new chapter gives us a perfect home to grow "Criminal," launch new shows, and bring even more stories to our listeners.”

Vox Media has been expanding its podcast business recently, launching nearly a dozen new original shows over the past year.

"Criminal" explores the unexpected side of true crime, telling thoughtful, complex stories that are deeply reported with compassion. It is one of the most popular podcasts in the world and has been featured on “Best of” lists in Time, The Atlantic, Rolling Stone, The Guardian and Wired. “Criminal" broke new artistic ground when it launched ... and I’m thrilled to see how we can take it to the next level as part of VMPN, while broadening the network’s scope into new genres.” says Marty Moe, president of Vox Media Studios.