How The Ad Industry Has Become More Diverse, Why It Needs To Get Even More 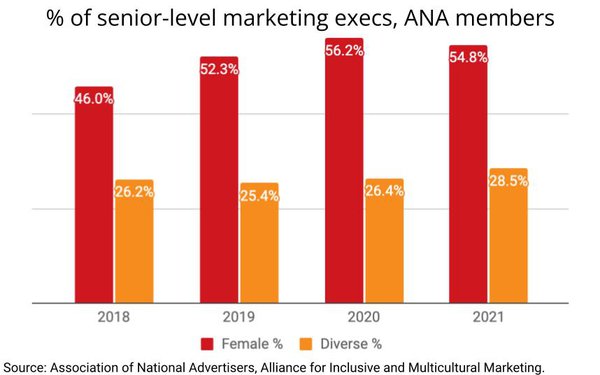 Years after the ad industry pledged to make itself more diverse and inclusive -- not simply for reasons of social equity, but also so it could better understand, represent and communicate with the composition of the consumer marketplace it seeks to serve -- it appears to be accomplishing the task. Especially when it comes to gender equality. In terms of ethnic diversity, it has made some inroads, but still has a way to go. Those are among the findings of the 2021 edition of an annual "Diversity Report" released this week by the Association of National Advertisers (ANA) and its Alliance for Inclusive and Multicultural Marketing (AIMM) unit.

The report shows that in terms of senior-level marketing ranks, women have become the majority of those positions held. In terms of ethnic diversity, the percentage of execs has risen to nearly 29%, up from only 26% a few years ago.

But when you drill into specific ethnic composition, as well as the seniority of marketing roles, many minority groups -- especially African American/Black -- still lag when it comes to senior roles in advertising.

“This report reveals that marketing industry is making important strides toward improving diversity among our ranks at all levels,” ANA CEO Bob Liodice said in a statement released with the report earlier this week, adding, “However, it also shows that we still have work to do to achieve a truly diverse balance in our workforce. I urge our membership and the marketing community at large to review the report carefully and to consider taking the recommended steps to reaching representative diversity levels.” 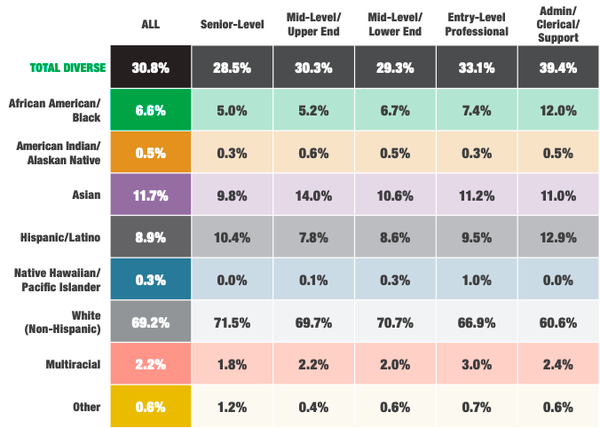