Rural News Network To Launch In 2022, Kicks Off With Water, Equity Projects 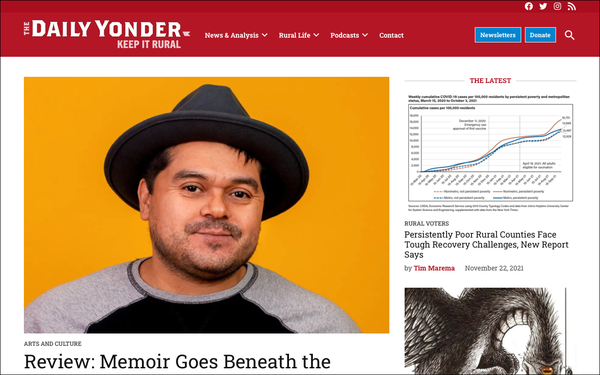 A new journalism consortium addressing the most critical issues confronting America’s rural communities will launch in 2022.

The Rural News Network, part of the Institute for Nonprofit News (INN), is expected to debut next year. But two projects are already underway: access to water in the West and investigating economic issues in Indigenous communities.

Investigate Midwest and The Daily Yonder are the lead hubs for both debut efforts. The stories will be published over several weeks beginning today, Nov. 22.

The first, "Tapped Out: Power and Water Justice in the Rural West" focuses on the intersection of water and disadvantaged communities, including contaminated water, drought, overuse of groundwater, land ownership and who has a seat at the table in water negotiations,”  Jonathan Kealing, Chief Network Officer, Institute for Nonprofit News (INN), told Publishers Daily.

The Rural News Network will add muscle by drilling down into specific rural issues, utilizing 60 independent INN-member newsrooms serving such communities across 30 states.

A key concern of the Rural News Network is representation.

“Rural America has been misrepresented as a monolithic land of rural white farmers, and nothing could be further from the truth,” said Kealing. “Through these two collaborative projects, and the wider Rural News Network, we will shine a lens on equity issues facing rural communities across this country, with a particular focus on communities of color often ignored by traditional media.”

In fact, more than 6.9 million people of color live in rural America, according to an analysis by Investigate Midwest of 2020 Census data provided by the Census Co-Op. That includes over 1 million Native Americans.

“In broad terms, we’re hoping to take a critical look at equity issues connected to education, healthy communities and the environment,” said Kealing. Topics include how federal funding has been spent in tribal communities, how tribes have become significant economic forces in areas forsaken by the government and how rural Indigenous groups have pursued sustainability efforts to revitalize their communities.

The organizational collaboration on equity and water, as well as ongoing issues of importance to rural Americans, are seen as part of a larger effort to highlight underserved communities.