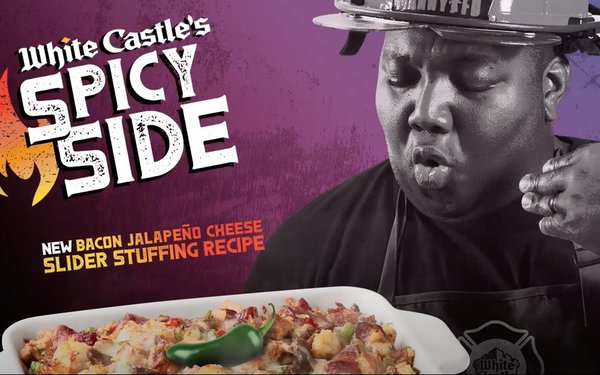 While spicing up its slider-based stuffing recipes for Thanksgiving, White Castle is expanding its social media presence to the OnlyFans portal, which is known for sexually explicit content

Another video of Washington preparing Southwest Jalapeño Cheese Slider stuffing can be seen currently only by paid subscribers of OnlyFans as part of the portal’s Safe For Work content—meaning it is suitable for viewing in a work environment.

OnlyFans’ Not Safe For Work content typically consists of pornography. During the COVID-19 pandemic, it’s become a money-making virtual workplace for sex workers, as reported by The New York Times.

Why is White Castle venturing into the OnlyFans world?

“We’ve been around for 100 years, and part of what’s characterized us is always looking to what’s next,” vice president of marketing and public relations Jamie Richardson tells Marketing Daily.

Describing OnlyFans as “a bit spicier and harder to find,” Richardson adds, “You can’t sit back and wait for people to figure out where to find you. So let’s go find them and have a conversation.”

After Thanksgiving, both videos will be available on White Castle’s YouTube channel.

Introduced in 1991, White Castle’s sliders can be purchased at restaurants in 14 states and grocery store freezer aisles in all 50 states.

Twenty sliders can be purchased housed in a box called a Crave Clutch that debuted last year.

“We also have a Crave Case that holds 30, a Crave Crate restaurants offer that holds 100 and—at one restaurant in Orlando—you can buy a Crave Pallet. That’s 6,950 sliders. You have to order that in advance,” says Richardson.