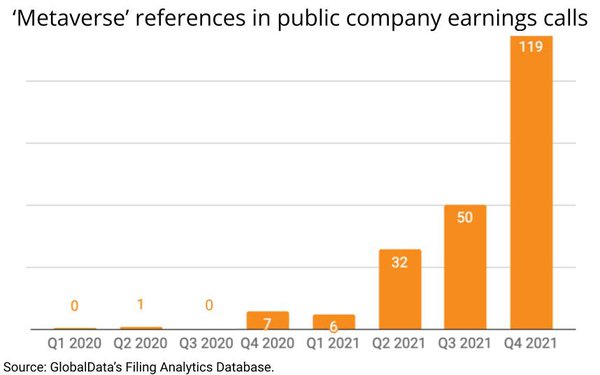 The metaverse is reaching peak buzz, not just on Madison Avenue or in the consumer press, but also on Wall Street, according to a new analysis of the quarterly earnings calls U.S. publicly-traded companies.

The analysis, released late last week by GlobalData, likely was sparked by Facebook's corporate reboot as "Meta," and its rationale for investing heavily in developing a full-blown metaverse for users, also triggered significant increases in the terms "virtual reality" ("VR"), and "augmented reality" ("AR)."

“Mega Cap companies have been especially positive towards VR and AR, with their sentiments towards these tech rising 7% over the past year," noted GlobalData Business Fundamentals Analyst Rinaldo Pereira, adding, "companies are looking to invest in VR and AR, likely because of their importance in the development of the metaverse. Companies such as Kopin, Vuzix, Warner Music Group and World Wrestling Entertainment are expected to scoop up gains from the development of metaverses.”