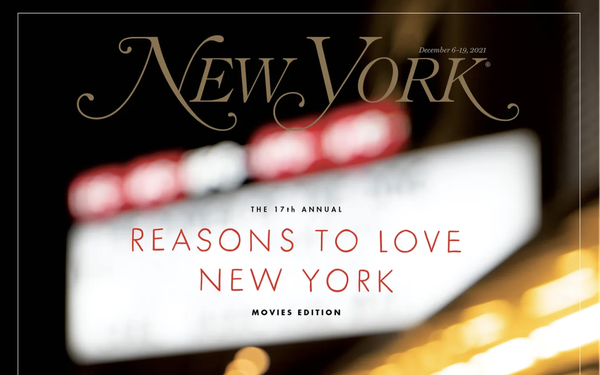 Havas New York, the Ali Forney Center and New York are partnering on a special ad section focused on the struggles of the more than 8,300 LGBTQIA+ youth who are abandoned or homeless.

These young people find themselves cast out of their homes due to transphobia and homophobia; they make up 40% of all homeless youth in New York City, according to the three partners. To underscore that staggering number, 40% of the advertising space in New York’s iconic “Reasons to Love New York” issue is dedicated to educating readers on the situation.

The ad section, called the “Issue Within the Issue,” is timed to coincide with the anniversary of the murder of Ali Forney, the gender-nonbinary youth and advocate for homeless transgender young people, who inspired the formation of the eponymous organization. Assigned male at birth, Forney was rejected by her family and worked as a sex worker. She was killed in December 1997 at the age of 22.

The “Reasons to Love New York” issue is available online and at newsstands on Dec. 6.

“The Ali Forney Center is such a crucial New York City institution, and we’re thrilled to work with them and Havas New York to feature this special-advertising project that brings to light an important issue affecting LGBTQIA+ youth in our city in one our most iconic issues of the year,” stated Manny Getachew, New York General Manager.

Added Alex Roque, president-executive director of The Ali Forney Center, added: “Homophobia, transphobia and lack of support and resources compound the challenges LGBTQIA+ youth face and make it hard to seek out social services designed to help unhoused people in our country. We’re thrilled to partner with Havas New York and New York magazine on this special project.”

The Ali Forney Center is the nation's largest nonprofit organization committed to saving the lives of LGBTQIA+ young people by protecting them from the harms of homelessness, empowering them with the tools needed to live independently, and providing a home for those who have been denied the love and support of their families. The “Issue within the Issue” gives readers a glimpse into the lives of LGBTQ+ youth who found success through the Ali Forney Center with a series of original essays, interviews, art and poetry.

“Our goal to make a meaningful difference in people’s lives and the ‘Issue Within an Issue,’ one of the largest single-issue ad buys in recent years, is a great demonstration of advertising done with purpose,” said Dan Lucey, Chief Creative Officer at Havas New York.