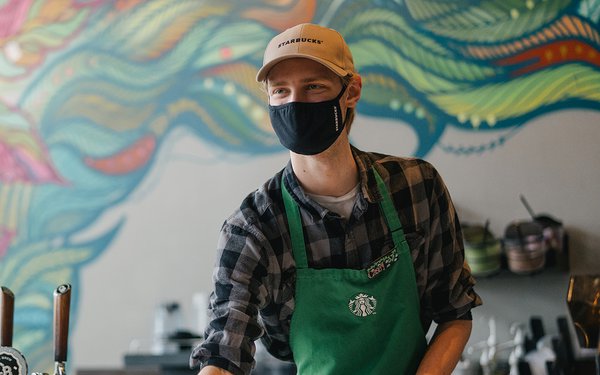 At least one Starbucks is officially a union shop now, with the National Labor Relations Board certifying the vote at one of the coffee giant’s Buffalo, New York stores. Unionization efforts failed at another store, and voting is still underway at a third. And union efforts have spread to Arizona, as well as Boston.

One store is a long way from a union tidal wave, and restaurants continue to be one of the least organized industries in the U.S. But the win for Starbucks Workers United does show just how radically changed the hiring landscape is for restaurants. It also underscores the difficulties restaurants face as they try and burnish their brand to appeal to potential employees.

Starbucks, which has actively pushed against unionization throughout its 8,000 stores, says it will negotiate with the new union in good faith.

But the Buffalo employees say the Seattle-based chain played rough in its efforts to discourage union efforts. They claim the company used hardline tactics, and they they were “subjected to a massive campaign of overwhelming psychological force.”

In a statement with the National Labor Relations Board, Buffalo employees accuse Starbucks of a “shock and awe” effort that included “one-on-one conversations, group meetings, constant surveillance, and a propaganda extravaganza.”

That kind of publicity can’t help as the chain looks to hire more help. Like many restaurant companies, Starbucks has been working to improve its appeal to workers and potential hires. In October, it announced plans to increase all hourly wages in the U.S. to $15, from the $12 it currently pays, by this summer. Doing so will raise its average hourly wage to almost $17 per hour.

But the industry’s hiring crisis continues to be dire, with the National Restaurant Association reporting that 81% of dine-in and 61% of fast-food restaurants have shut portions of their dining rooms because of staff shortages. Almost 80% say they do not have enough employees to handle business, and 40% say they are at least 20% below staffing targets.

Workers are exhausted. “We are not anti-Starbucks,” writes the new union on its website. “We are Starbucks! We know what it takes to make this company run… we cannot reach our full potential if we are understaffed, overextended, exhausted, and burned-out.”

The Bureau of Labor Statistics reports that while 10.8% of American workers belonged to a union in 2020, a rise of 0.5 of a percentage point from the previous year, restaurants and food-service occupations have some of the lowest rates of representation at 3.4%.

While he remains “optimistic about the company’s long-term fundamental outlook,” issues raised by its business in China are concerning, he writes in a recent note.

Recently, a state-backed newspaper reported that Starbucks used expired ingredients in two locations and revealed operational issues in 18 other stores.

In the U.S., he says, such reports wouldn’t get much notice. But “history would suggest Chinese consumers could react fairly negatively, leading to greater-than-expected pressure on near-term sales performance in China.”

Currently, China makes up about 13% of the company’s revenue, but “the market represents a significant long-term growth opportunity,” he says. “We fear that any indications of brand-specific issues in this market could create some anxiety among investors,” especially given rising rates of new COVID-19 variants and potential cost pressures.