New York Times Co. In Deal To Buy 'The Athletic' 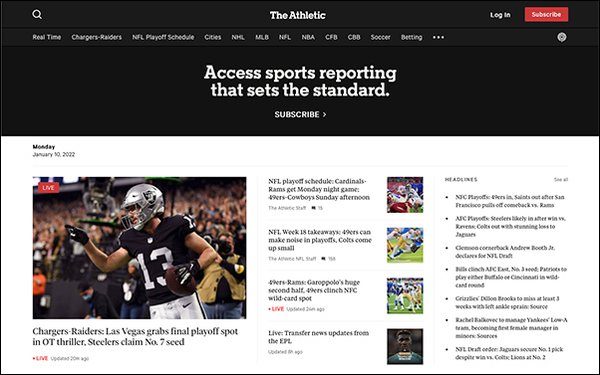 The New York Times Co. has agreed to buy the subscription-based sports site The Athletic in a deal valued at around $550 million, according to multiple reports Thursday morning. It was first reported in The Information, which cited a person familiar with the situation, and confirmed Thursday afternoon by the Times itself.

The deal brings the Times, which has more than eight million total subscriptions, quickly closer to its goal of having 10 million subscriptions by 2025, while also offering its audience more in-depth coverage of the more than 200 professional teams in North America, Britain and Europe that are closely followed by The Athletic’s journalists, the Times said.

The Athletic is “a great complement to The Times,” CEO Meredith Kopit Levien, said in a report by the newspaper. “We are now in pursuit of a goal meaningfully larger than 10 million subscriptions and believe The Athletic will enable us to expand our addressable market of potential subscribers,” she added.

The deal represents the culmination of a year-long effort by the Times to acquire The Athletic and its 1.2 million subscribers. An earlier attempt by the Times failed in June, when the two sides were unable to agree on a price. A potential acquisition of The Athletic by Axios also failed to materialize. Part of the problem: The Athletic had a valuation of about $500 million, but the site was seeking as much as $800 million in a sale.

Then The Athletic hired the investment bank LionTree in September to help execute a deal — and talks with the Times became exclusive in December.

Even with more than one million paying subscribers, The Athletic wasn’t expected to be profitable until 2023. It produced 2020 revenue of $47 million, per The Information. Its 2021 revenue was projected to hit $77 million — though in a call Thursday Kopit Levien said revenue will be closer to $65 million, with $55 million in operating losses.

But the site fits with the Times’ strategy of reaching 10 million subscribers, and its sports focus gives the Times an additional topic-oriented subscription cluster, in addition to games and cooking.

The Athletic, founded in 2015, is based on the premise that sports fans are deeply invested — their appetite for a team or sport is insatiable. The site hired reporters from local newspapers, many with years of expertise, but laid off as papers struggled with media-industry disruption. Their ambition, according to this report in Puck, was “to be the local sports page for every city in the country.”

The Athletichas about 600 employees — about 400 in its newsroom, making it the second-largest sports-journalism organization in the country, behind ESPN, according to the Times report. It will be operated separately from the Times’s newsroom and sports section, the company said. The publisher will be David Perpich, a longtime senior executive at the Times who has been a leader of its cooking and games apps, as well as the product-recommendation site Wirecutter.