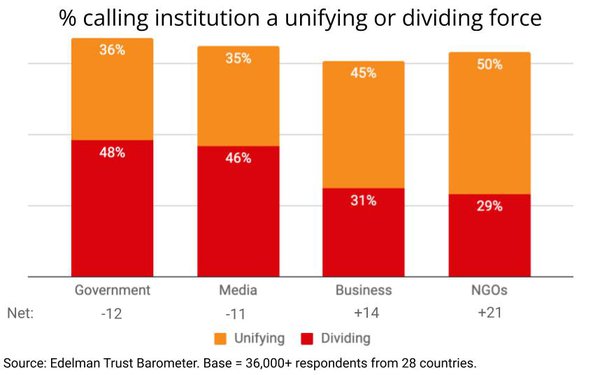 Businesses are now the most trusted institutions worldwide and are being forced to pick up the slack for solving society’s woes as trust in governments and the media are collapsing, both worldwide and in the U.S. That is the top finding of the just-released 2022 edition of independent PR firm Edelman’s annual Trust Barometer.

The study, the 22nd annual edition of a global study based on surveys of more than 36,000 people in 28 countries, paints an even more insidious picture of the role of government and the media in accelerating distrust by using information to manipulate society for power and money.

“Government and media feed cycle of division and disinformation for votes and clicks,” the report notes underscoring the big theme of this year’s report: “The cycle of distrust.”

It is by far the most cynical theme defined yet by Edelman, which normally strives to find some upside to shifts in society’s perceptions of trust in its major institutions. Instead, Edelman paints a bleak picture of the future, with confidence in government – and especially democracies, health organizations, central banks, etc. – falling in most countries worldwide. While Edelman provides some advice for rebuilding trust in institutions, including an accompanying essay by Edelman CEO Richard Edelman, the onus has fallen on businesses, and to a lesser extent, NGOs (non-governmental organizations), to pick up the slack.

“Business must now be the stabilizing force delivering tangible action and results on society’s most critical issues,” Edelman writes, emphasizing, “Societal leadership is now a core function of business.”

The study notes that government, as recently as two years ago was the most trusted institution overall, has slipped to the bottom of the rung due to the un-virtuous cycle of distrust accelerated by governments, politicians and the media to gain power and money.

“This vicious cycle of distrust threatens societal stability,” Edelman asserts, describing it as a “death grip where media is chasing clicks and government is chasing votes, both feeding a cycle of disinformation and division and exploiting it for commercial and political gain.”

Perhaps most alarming of all, trust in democracies continues to erode and the general view is that media – especially the “weaponized” spread of misinformation – are playing a role in undermining it. More than three quarters (76%) of the world’s population now believe “false information or fake news” are being used as a “weapon” to undermine society, up 4 points from last year. In the U.S., 74% of the population believe so, up 2 points from last year.

While Edelman doesn’t explicitly single out who has been weaponizing media to create division for political and/or monetary gain, it does provide a snapshot of the political spectrum inside the U.S. revealing that the trust chasm between Republicans and Democrats has widened to crisis proportions.

In terms of Edelman’s overall trust composite, Democrats currently have an index of 55 (even with last year), while Republicans have fallen to 35, down 14 points from last year.

With an increasing burden on businesses to play a unifying role that rebuilds trust in society overall, the study notes that also includes an elevated role for brands, with 58% of people now saying they either buy or advocate for brands based on their beliefs and values.