Instacart: 'Break Up' With Restaurant Takeout, Order Grocery Meals Instead 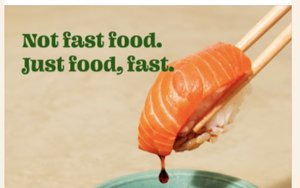 Instacart is encouraging consumers to “break up” with restaurant takeout by ordering ready-made meals from some 4,100 grocery stores in 35 states for delivery in as quickly as 30 minutes.

The online grocery platform says the new Ready Meals Hub within its app is designed to help people “take a break from cooking” while “dishing up inspiring, more affordable and nutritious food alternatives to restaurant delivery.”

“Our customers can also include a handful of grocery staples in their rapid delivery order—making it easier than ever to grab lunch and a few items for tonight’s dinner all in a single order,” Publix Vice Preisdent Erik Katenkamp said in a news release from Instacart.

Even though Instacart is promoting nutritious restaurant food alternatives, items in Ready Meals Hub include prepared soups and macaroni and cheese from Panera Bread.

Two months ago, the company launched its first integrated brand campaign fronted by a spot from Goodby Silverstein & Partners.

Dubbed “Your Mom’s Homemade Short Ribs,” it envisioned a world where one-of-a-kind family dishes were commercially available and their everyday creator is transformed into a culinary superstar.

“With this campaign, we hope to remind people that food is more than sustenance; it’s an opportunity for human connection,” Instagram CEO Fidji Simo said at the time.

According to data from iSpot.tv, Instacart spent an estimated $11.9 million on national television in 2021. Nearly 60% of its ad impressions were on ABC, CBS, Fox News, MSNBC and NBC.

Simo joined Instacart last July from Facebook in the walkup to a planned initial public stock offering. At the time, Instacart was #2 in grocery deliveries, with a 45% market share compared to Walmart’s 48%, according to Bloomberg Second Measure.

Four months later, The Information reported that Instacart had decided not to execute an IPO in 2021.

Instacart delivers goods from more than 65,000 stores across more than 5,500 cities in North America—making it available to more than 85% of U.S. households and 90% of Canadian households.