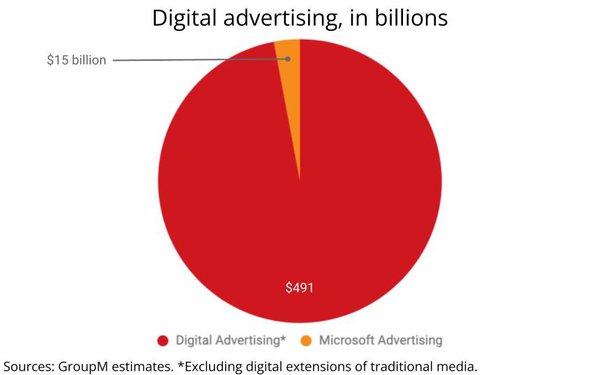 It's been more than three years since Amazon officially displaced Microsoft from digital media's "Big 3," joining Google and Facebook as the world's largest digital ad sellers, but analysts aren't counting Microsoft's ad dominance out, especially after its just-released earnings release showing stellar ad revenue results for its first fiscal quarter (ended Sept. 30, 2021), as well as expectations of future growth in the ad business due to its acquisitions of both Xander, as well as Activision Blizzard.

"Across Bing and Edge, we are creating differentiated, high value experiences for consumers and advertisers in key verticals, including shopping. Just one year since the launch of coupon and price comparison features, Edge has already surfaced more than $800 million in savings," CEO Satya Nadella told analysts and investors during its earnings call, adding, "More broadly, we are expanding our opportunity in advertising."

He went on to note that over the past 12 months, Microsoft's total advertising revenue, including LinkedIn, "surpassed $10 billion, ex-TAC [traffic acquisition costs], adding, "And with our acquisition of Xandr, we will bring to market new advertising solutions that combine our deep audience understanding and customer base with Xandr’s large-scale data-driven platforms."

Estimating that Microsoft likely still is the world's "fourth largest seller of advertising, excluding China," Wieser said it benefited from multiple factors related to the post-pandemic expansion, including a surge in overall ad demand, as well as LinkedIn benefitting explicitly from demand for recruiting advertising following the "Great Resignation."

Looking forward, Wieser predicted that Microsoft is also well positioned to benefit from the emergence of the metaverse in both consumer and enterprise applications, singling out its Activision Blizzard acquisition, though he pointed out that "there was not much commentary" on the deal during the earnings call.