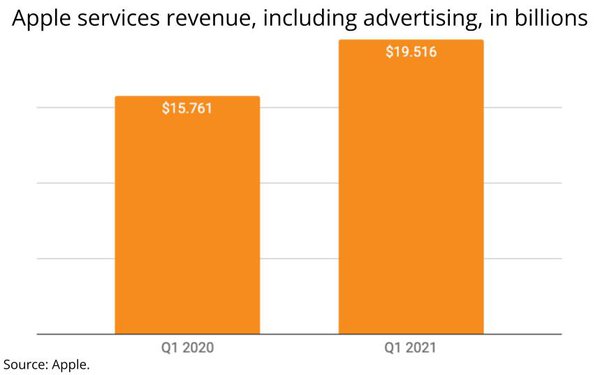 While Apple does not break out its advertising sales, it reported that its overall “services” operations, which includes advertising – primarily App Store search ads from app developers promoting installs – as well as App Store commissions and subscription revenue, “reached an all-time revenue record of $19.5 billion, up 24%, with all-time records for cloud services, for music, video advertising and payment service,” CFO Luca Maestri said during an earnings call with analysts and investors Thursday.

He attributed the results to a “combination of factors,” including, “the fact that we continue to have more and more engagement of our customers on all the services.”

Apple executives did not address the impact of its “App Tracking Transparency” framework, and the deprecation of its identifier for advertisers (ADFA) user device identifiers, but industry analysts believe it likely has shifted some ad spending from other platforms reliant on the data – like Facebook – to Apple.

While Apple’s services revenues represent only about 19% of the $104.4 billion in total sales during the quarter, CEO Tim Cook recognized the creation of the App Store that spawned them as an “economic miracle” created by the iPhone.

“A few weeks ago, we marked the 15th anniversary of the day Steve [Jobs] revealed iPhone to the world,” Cook said, adding, “We knew that we had the beginnings of something fundamentally transformative, though none of us could have predicted the incredible and meaningful impact it would have on all of our lives. The creative spirit that made the first iPhone possible has thrived at Apple every day since. We never stop creating. We never stop innovating.”