Meta Continues To Shoot Itself In The Virtual Foot 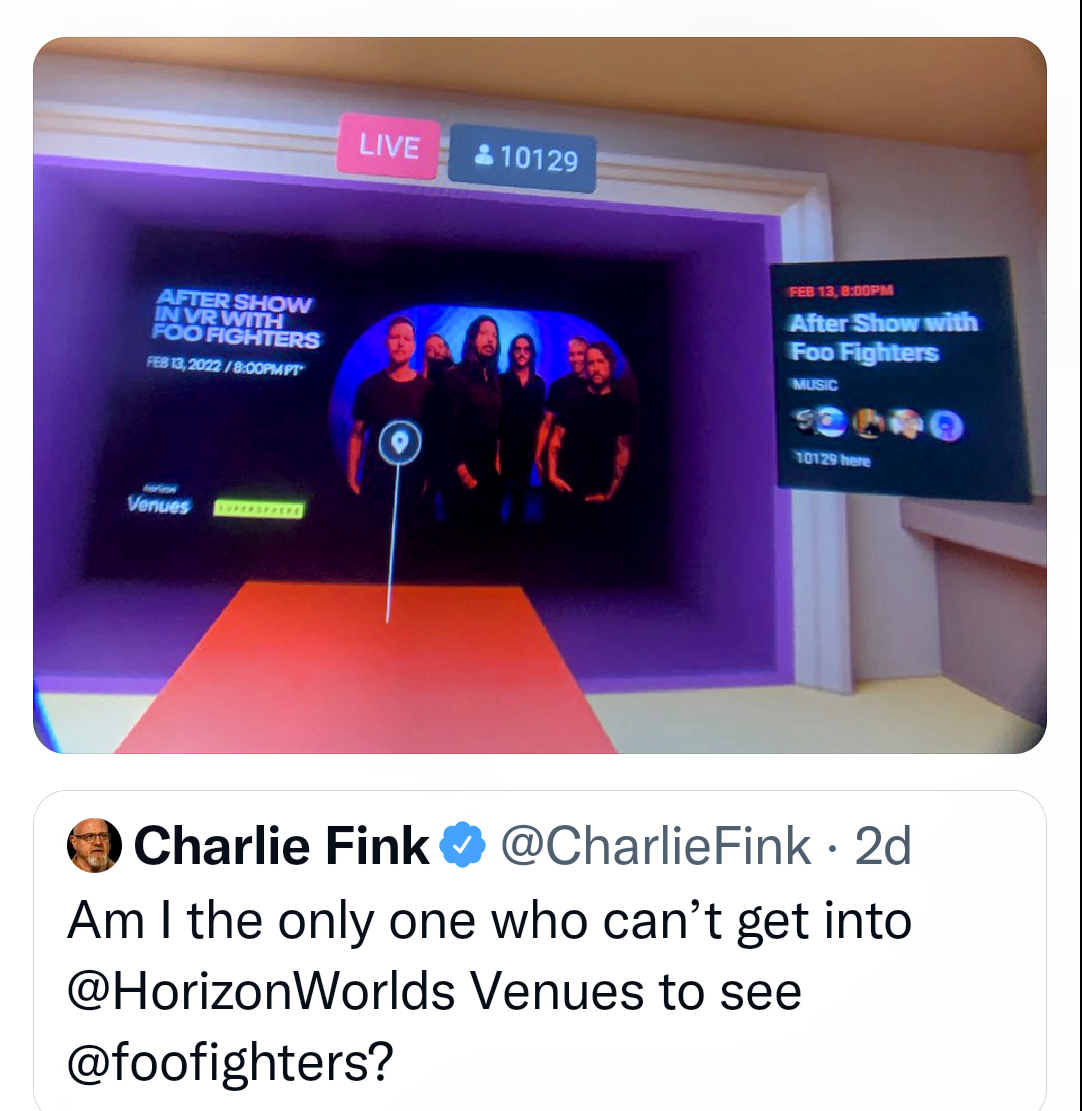 It looks like Meta, Facebook’s parent company, may have blown it again.

The Foo Fighters’ post-Super Bowl virtual reality (VR) concert was supposed to be a huge push for the tech giant’s social Horizon apps, which are being marketed as the bedrock for the future metaverse.

Instead, thousands of eager fans and owners of the recently rebranded Meta Quest 2 VR headset were never able to access the show. Further issues were documented by the host of the “Voices of VR” Podcast, Kent Bye, on Twitter.

Bye wrote that there was “a horrible onboarding experience, the lobby crashed, & LOTS of people could not get in.” One main reason for the crash was that Horizon Venues didn’t open until 8 p.m., and the show itself started only five minutes later, causing unnecessary stress on the servers.

Reading through Bye’s Twitter thread, along with the dozens of comments from other Meta Quest 2 users, it becomes quite clear that there was nothing seamless about the experience. Not only were users unable to load the concert, but with the crashed lobby, they had trouble finding a way to join.

For those who were able to access the show, many complained about cameramen walking in front of them, blocking their view of the band. Though it sounds ridiculous, the cameramen were shooting 2D footage for a Facebook livestream, which Bye believed to be prioritized over Meta’s 3D show.

“The VR shots were also pretty low-res, far away,” Bye wrote. “Positioning was more optimized for the 2D sightlines.”

Furthermore, the show itself wasn’t live at all, but a prerecorded 40-minute set (which, to no surprise was pretty epic. Dave Grohl and the Foo Fighters are rock legends, after all.).

Other user reviews of the show included some positive aspects as well––some of the lighting effects were stunning and immersive and the sound moved in accordance to user movement around the band. But one aspect of Horizon Venues –– Meta’s virtual social club ––i s socializing, which many users found impossible without being able to connect to “Parties” inside the venue.

Overall, the whole event had the chance to be a PR win, but, in reality, became another fumble for Meta CEO Mark Zuckerberg’s virtual crusade. And Vivek Sharma, vice president of Horizon, didn’t help, tweeting that “the demand was unprecedented.”

That’s a lousy excuse, to say the least. An industry-leading rock band with over 13 million followers on Spotify, playing a first-time virtual concert after the most-watched show in the past five years? I’d say the demand wasn’t only “precedented,” but expected.

At this point, we’re all thinking it: With billions of dollars to throw at its tech goals, why can’t Meta get anything right?

It’s been quite the year for Zuckerberg’s beloved brainchild. First whistleblower Francis Haugen leaked the Facebook papers, which further undermined the company’s public image, proving that its conscious decision to let misinformation and hate speech grow on its apps caused real-world harm.

And how could we forget about the abrupt name change, the endless stream of lawsuits, or the first decline in Facebook’s daily users in its 18-year history, and its subsequent plunge in the stock market?

It seems that Meta is rapidly losing consumers’ trust. On Monday, I covered a study done by blockchain technology company, Advokate Group, which found that among 1,000 U.S. consumers, 77% of those interested in joining the metaverse were concerned about Meta owning the data.

It’s difficult to say whether Meta will rebound from its recent losses, or what all of our current definitions and ideas of the looming metaverse will even amount to over the next few years. And other tech giants will be likely competitors -- like Apple, which many think will soon release its own VR hardware, and Microsoft, which cited the metaverse when purchasing massive game developer Activision Blizzard for $68.7 billion.