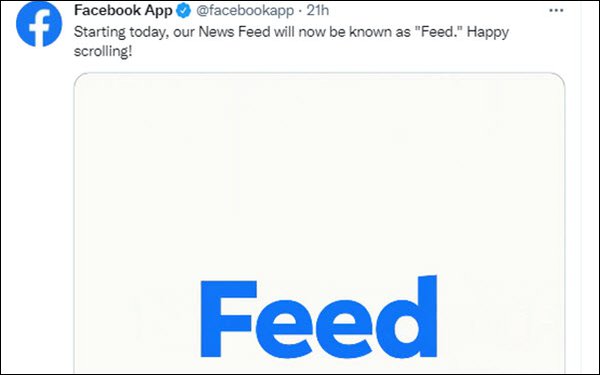 Meta has announced that Facebook’s “News Feed” has been shortened to plain old “Feed.”

In other words, the change doesn’t affect the actual content of the feed — it’s still a combination of news (real and fake) and posts from friends, and apparently does not alter the algorithm or an individual’s in-app experience.

Some are reading the “diverse content” mention as an indicator that this is another attempt by Meta to deflect criticism and scrutiny of Facebook’s role in spreading dangerous misinformation under the guise of “news.”

And that this comes shortly after Facebook reported the first decline in daily users in its history, perhaps finally making the damage to its reputation somewhat meaningful to the tech giant.

At the same time, it may also reflect Meta’s determination to expand its role as a news source via Facebook News, which it has been expanding into international markets — most recently France, as announced on Feb. 14 — since it was launched in 2019.

Meta describes Facebook News, a dedicated tab on Facebook in the bookmarks section, as part of its “ongoing commitment to journalism and content creation,” designed to “spotlight news stories from a diverse range of reliable and relevant news sources” and “give people a dedicated space to seek out stories that matter the most to them, whilst ensuring original reporting is given a wider reach.”

Since both the feed formerly known as News Feed and Facebook News stream news, or what’s described as news, the thinking may be that “Feed” will help reduce confusion between the two.

Facebook is also in the midst of fighting government regulations here and in other countries that would force it to reimburse legitimate news publishers for the content it uses to help drive users and advertising revenue — another possible factor in the feed name change.