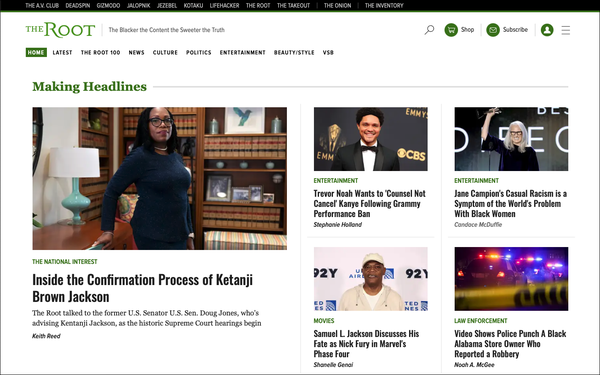 “The Root’s mission of providing unflinching news commentary and analysis with its own unique point of view is more critical than ever,” De Luca said. “Our growing team will help build upon this mission in 2022 with a series of content initiatives that swerve to extend the brand into events and awards, as well as more business coverage and a focus on Black women."

It all adds up to a transformative year for The Root, the 14-year-old online brand that’s part of G/O Media, a company that also owns the digital-first brands Gizmodo (tech and science), The A.V. Club (pop culture and entertainment), Deadspin (sports), Jalopnik (car culture), Jezebel (women’s interests), Kotaku (gaming), Lifehacker (lifestyle), The Takeout (food and drink), The Onion (satire), and The Inventory (ecommerce).

De Luca’s plan is to revamp the The Root’s Glow Up Style Awards and relaunch The Root 100, The Root Institute, and add such features as Small Business Spotlight and Protect Black Women, a series meant to ensure that Black women get the support they deserve.

All told, The Root reaches more than 10 million visitors per month with an editorial mix that includes commentary, opinion, breaking news and culture content. It was co-founded in 2008 by preeminent scholar Henry Louis Gates.