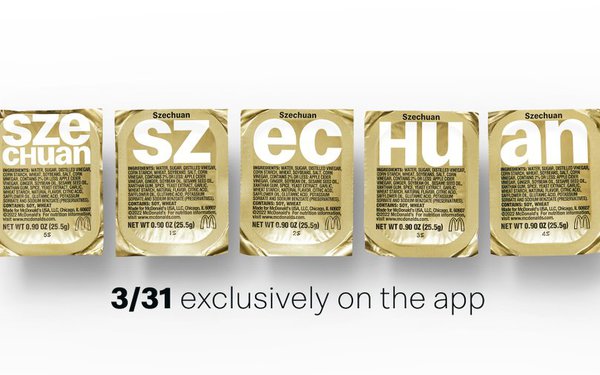 McDonald's is trying to keep its playful promotional streak going, with text messages touting a 10-day Szechuan sauce drop for its McNuggets.

And it's putting the occasional favorite back in the rotation with new packaging. Besides ordering it as an option for McNuggets -- only through the chain's app -- customers can also buy the sauce a la carte. The QSR is also encouraging superfans -- who can also order up to five packets per order -- to see if they can collect enough to spell out "SZECHUAN."

McDonald's says it has only brought the sweet-and-spicy back three other times in the past 24 years.

This is just the latest way the Chicago-based company is doubling down on digital sales, including the launch of its loyalty program last year. After just six months in the U.S., it had already gotten 30 million loyalty members enrolled, with 21 million active members earning rewards.

McDonald's use of sassy limited-time offers has long been one of its favorite tools for boosting sales, from Shamrock Shakes to McRibs. And with the recent success it's had with celebrity meals, featuring collaborations that have included Saweetie, BTS, and Travis Scott, those offers are increasingly digital.

Separately, the Golden Arches are under threat in Russia, as "trademark squatters" are swooping in. Like many Western companies, McDonald's announced that it would close restaurants in all 850 of its Russian markets and pause operations in response to Russia's invasion of Ukraine. (The fast-food giant employs 62,000 people in Russia and is said to earn about 9% of its sales in Russia and Ukraine.)

A Russian law firm quickly filed for a McDonald's-esque trademark for a restaurant concept called Uncle Vanya's. The logo looks almost exactly like that owned by McDonald's but rotated 90 degrees to the right.

The move comes after Russian officials say that patents based in foreign countries deemed hostile to Moscow are fair game. And intellectual property experts say affected brands can't do much.

The Washington Post reports that the practice is likely to increase as Russian opportunists snap up trademarks to sell them to entrepreneurs.

Josh Gerben, founder of law firm Gerben Intellectual Property, tells the Post that in addition to the Uncle Vanya's application, others have filed to trademark the name McDonald's, while another wants to trademark McDuck, Russian slang for the restaurant.

Gerben is tracking more IP piracy on his Twitter feed, recently tweeting that Russian lawyers have applied for trademarks for something called the IDEA furniture factory, using the Ikea logo; Rustagram and Instarus, and Starbucks and McDonald's.