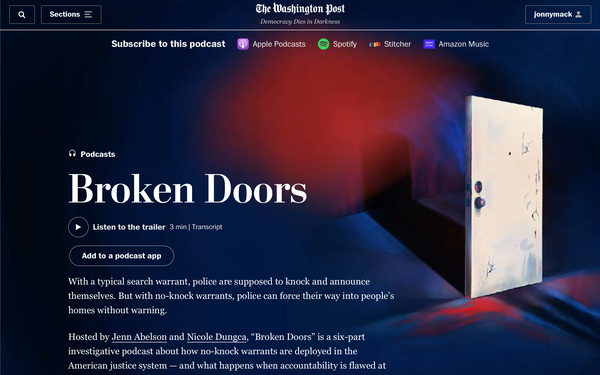 The Washington Post today announced the launch of  "Broken Doors," a six-part investigative podcast that explores no-knock search warrants, one of the most intrusive and dangerous forms of policing.

The podcast exposes failures in the oversight of these warrants and how they have at times led to fatal police shootings that have had a lasting impact on communities. It includes an interview with the mother of Breonna Taylor, who was killed in 2020 by police carrying out a no-knock search warrant in Louisville, Kentucky.

“‘Broken Doors’ aims to shed light on what happens when the legal checks and balances imposed on police are weak or missing,” Washington Post Deputy Investigative Editor David Fallis said. “The Post is deeply committed to reporting on police accountability, and this podcast builds on years of such journalism, including our police shootings database, started in 2015, and the ‘Unaccountable’ series, which launched in 2021 to focus on policing amid the renewed push for reform.”

From St. Louis to rural towns in Monroe County, Mississippi, Abelson and Dungca document how police repeatedly secured warrants based on unnamed sources, and how raids have ended in deaths and the recovery of little or no contraband.

“The breadth of reporting and the audio our team has gathered for this podcast show a stunning view of how easily no-knock raids can be approved and carried out,” said Renita Jablonski, director of audio.

This is the second long-form investigative podcast from TheWashington Post. “Canary: The Washington Post Investigates,” the first long-form investigative podcast from The Post, launched in 2020 and explores the decisions of two women to share their accounts of sexual assault, and the ensuing consequences of those decisions, revealing systemic problems within the criminal justice system that make it difficult for survivors to feel any sense of justice.

The trailer of “Broken Doors” can be heard here or wherever you download podcasts. The first three full episodes will be available April 6, with the next three publishing in the following weeks.