Twitter's Price Jumps 25% On News That Musk Has 9% Share 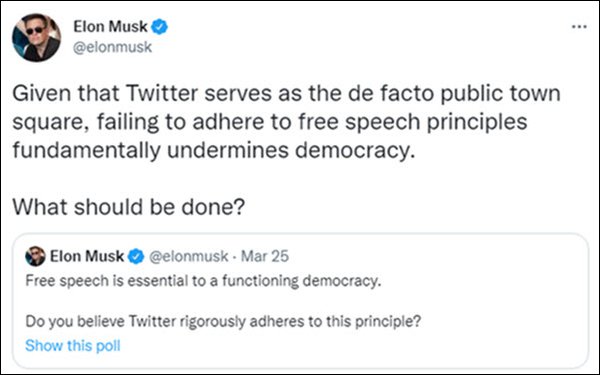 Shares of Twitter stock leapt more than 25% in pre-market trading on Monday after news emerged that Tesla CEO Elon Musk now owns a 9.2% stake in the company.

Musk now owns 73,486,938 shares, according to a 13G filing released today by the Securities and Exchange Commission. Based on Twitter’s closing price on Friday, that stake is worth $2.89 billion, according to CNBC.

While the stake is classified as “passive,” investors may be expecting activism based on Musk’s recent critical tweets about Twitter.

On March 24, Musk, who has 80 million Twitter followers, asked them to weigh in on whether the “Twitter algorithm should be open source.”

Twitter co-founder Jack Dorsey retweeted the poll, saying, “The choice of which algorithm to use (or not) should be open to everyone.”

On March 26, Musk followed up by tweeting: "Given that Twitter serves as the de facto public town square, failing to adhere to free speech principles fundamentally undermines democracy. What should be done?”

Musk could decide to take a more aggressive stance on the platform, which eventually could “lead to some sort of buyout,” Wedbush analyst Dan Ives noted on Monday on “Squawk Box.”