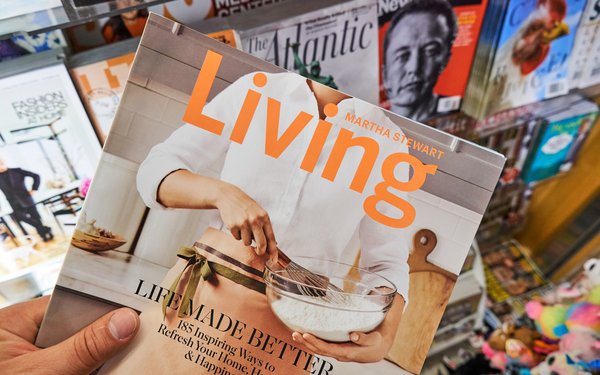 The title is the seventh Meredith magazine this year to be shifted to online-only format. It joins six of the industry’s noteworthy titles that made the pivot in February: EatingWell, Entertainment Weekly, Health, InStyle, Parents and People en Español.

Those cuts resulted in about 200 layoffs, according to the company, and in this latest move, 20 New York-based employees will be “impacted,” according to a report in the Des Moines Register, which quoted an email from Dotdash Meredith Chief Business Officer Alysia Borsa.

The May edition will be the last print issue of Martha Stewart Living, the Register reported. The magazine, which was launched by Time Inc. as a quarterly in 1990, was published 10 times per year, with a rate base of just over 2 million. Technically, it’s owned by Martha Stewart Living Omnimedia, but Meredith has had operational control since 2015.

Over the years, the magazine has hewed closely to the entertaining, decorating and crafting vision of its namesake, the lifestyle maven Martha Stewart.

Dotdash CEO Neil Vogel has made no secret of his intention to shift to a digital-only format for many of the Meredith titles. In February, he noted that acquiring Meredith was about buying brands, not magazines or websites.

“It is not news to anyone that there has been a pronounced shift in readership and advertising from print to digital, and as a result, for a few important brands, print is no longer serving the brand’s core purpose,” he said at the time.

Vogel promised new investments in the remaining print magazines, including enhanced paper quality and trim sizes. “We are infusing fresh energy across these print-forward brands in all formats to make sure they can meet both the moment and the needs of their readers in new and innovative ways,” Vogel wrote.

Just not Martha Stewart Living -- and perhaps others to come.